I met Jim on July 2, 2000, at the First Unitarian Universalist Congregation of North Palm Beach, where I was a member. A woman acquaintance was the day’s greeter. When Jim walked in, she recognized him as someone she had met once before, and introduced us. After saying hello, he went into the sanctuary, and a few minutes later, I followed, only to find that he was sitting in the row where I usually sat. I saw no reason to change my habit, and sat next to him.

Halfway through the service conducted by a guest speaker, I decided to leave. Jim made the same choice a minute later. I am usually shy and don’t initiate conversations with strangers, but for some reason, I drove around to his car and said, “You didn’t care for the talk, either, I guess.” Agreeing, he laughed, and then asked if I would like to have coffee.

Two hours and several cups of coffee later, we said good-bye, but with a date to walk on the beach that evening.

What a walk it was! The waves softly washed at our feet as a soft breeze wafted the sounds of the ocean to our ears. It seemed we walked for miles, just talking, and eventually holding hands. When we finally returned to our cars, he touched my chin and gently kissed me. I still remember the softness of his lips, his gentle touch. It was the best kiss I had ever had.

In the months that followed, we slowly became a couple and went to events together.

I recall two memorable Halloween parties. At the first, we won a prize for the ugliest couple: Jim wore a wig and one of my dresses. He was the bearded lady. I wore my short hair slicked back, painted on a mustache, padded my tummy with a pillow, and wore a man’s suit and tie. We were, indeed, an ugly couple.

At the second Halloween party, we were going to go as a cat (Jim) and mouse (me). After taking a shower and starting to put on my house makeup, the phone rang. Running to answer it, I slipped and twisted my knee. Ouch! When Jim got home, he wanted to take me to the ER, but I insisted I would be OK, if I used crutches. (We had some.) So, we went to the party. Everyone thought the crutches were part of my costume! Unfortunately, the pain finally forced me to go to the ER. (No permanent damage.)

Jim managed a travel agency when I met him. He made me an honorary employee and got me membership into the International Airlines Travel Agency Network. The membership allowed us to travel on “spec” tours free or at reduced rates. One of these was a two-day sailing on a cruise line (I did not like it); another was a week’s vacation on a sailing ship.

What a trip that was! The ship was a true sailing vessel and only entertained a couple hundred guests, unlike the big cruise liners that were small at-sea cities. We sailed out of Granada in the Caribbean, in late September.

The problem with a late-September excursion in that part of the world is hurricanes. One was lurking at sea. The captain of the ship tried to skirt the worst of the storm, but the waves actually covered our porthole, as the ship bobbed in the angry waters. That night, items were had stowed in the bathroom (tooth brushes, combs, etc.) literally flew out of the door. We had to sleep crosswise on the bed, else we would have rolled off. The next morning, the sea was quieter (but not calm), and Jim arose to go to the mandatory life-boat meeting. I sat up, felt the nausea from the still rolling ship grow, and told him they could throw me off the boat, but I staying in bed, flat on my back.

Nobody tossed me into the sea, and I recovered without throwing up. That evening, though, seas continued to be rough, and as we sat down for our meal, there was a sudden lunge. Chairs slid over the dining room deck.

The next day, all was calm and I was finally being able to snorkel and we strolled in villages on St. Lucie and elsewhere, I never became a fan of any kind of sailing, however.

Just prior to 9-11, I had left my place of employment as an editor and began working as a freelance editor/writer. The attack on the World Trade Center changed America’s business outlook. As my freelancing opportunities started to fade, I began to look for another full-time position.

I was given an opportunity to join a publishing company in Pennsylvania. I needed a job, but I didn’t want to move to Pennsylvania. So, I continued to look. A month later, I was offered a position in the Jacksonville area. Of course, that meant moving and leaving Jim.

But Jim had a solution to that weighty problem. “I’ll follow you anywhere,” he vowed.

When Jim and I decided--four years after meeting and living together--that we should get married, we looked all over Jacksonville for a venue to exchange vows. One evening, while soaking in the swim-spa, we again debated the merits/demerits of the various sites. Suddenly, as we looked out over our backyard “lake” (really a pond), we realized that we had the ideal wedding site­--under the weeping willow, with the pond in the background. It was the loveliest wedding I had ever been to. Under clear skies, surrounded by our families, we pledged our love and friendship forever. 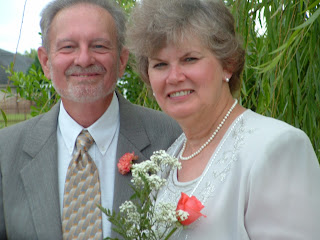 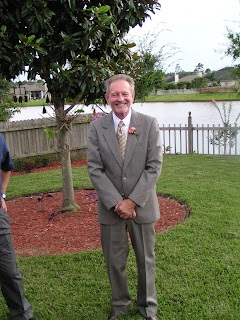 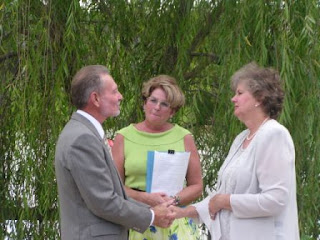 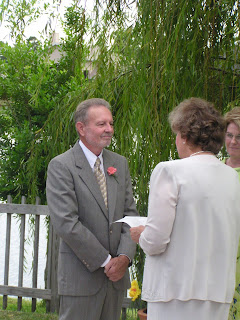 Travel had never been a high to-do on my bucket list, probably because I never wanted to travel alone but also because I never had the money for such a luxury. After Jim's mother (who lived with us for about six or seven years) passed away, Jim began teasing me with the idea of buying a recreational vehicle. It took awhile for me to come around; I thought the expense wouldn’t be justified. But Jim finally prevailed, and with the proviso that I would not have to drive it, we bought our first RV. (We eventually bought and sold a total of five RVs. The first was the best, however.) 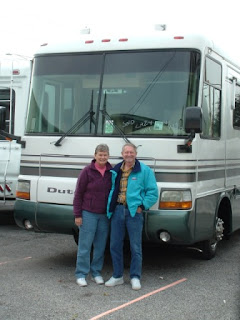 I admit that I went into RVing “kicking and screaming.” My doubts about RVing gave birth to the Reluctant Rover blog, which served as the foundation for my book, Don’t Back into the Palm Tree.  But long before we sold our last RV (a luxurious and commodious truck camper), I found Jim’s love for camping catching. I was no longer the Reluctant RoVer; I was the Enthusiastic RoVer. In fact, after we adopted our dog Katie and then Lex Luthor (a kitten), we came close to buying a small travel trailer, so that we could travel to state parks and fish. (I am grateful we did not buy one.)

Prior to meeting Jim, I was an avid golfer. It was something I could do by myself, as well as with friends. When I moved to Jacksonville, I stopped golfing for awhile. After several years, though, I caught the fever again and introduced Jim to this sport, something he never saw himself doing. Then he caught golf fever. We loved to try out new courses once or twice a week. Golfing, however, was put aside after he had his near-fatal accident (falling off the roof of our RV) in 2013.  As a substitute leisure-time activity, we began fishing.

What a joy! We traveled to an assortment of state parks to cast our lines. We never caught many fish, but we spent peaceful hours by the water and on the beach.

We bought a used bass boat, but sold it when we realized a 10-foot boat was too small to travel safely on the St. John’s River to get to the marshes. We sold it and then purchased a 14-foot Porta-Bote (a fold-up boat), which we could take with us when we went camping. We used it a few times, until we admitted that although we could carry it on the truck we towed behind our RV, it was not as convenient as we’d thought it would be for an octogenarian and a septuagenarian to launch.

Jim decided that to get to the best local fishing spots, we should join a local boat club. As usual, he had to cajole me before I finally gave in.

He really enjoyed driving the various fishing boats; I did not. In fact, I was never comfortable out on the water, despite always wearing my life jacket and being a good swimmer. I did enjoy fishing, however. After about a year of membership, we decided the monthly fees were not worth the cost of membership, especially since the boats were not in the best repair. We had fun while it lasted, even though we didn’t catch many fish. (The fish we caught were the best-tasting ever!) 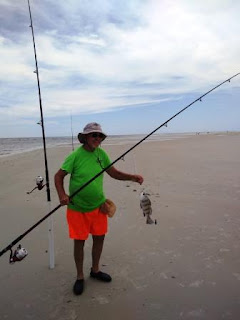 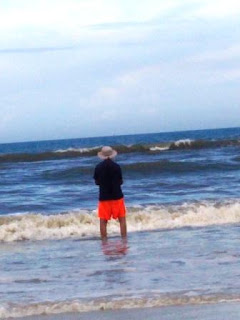 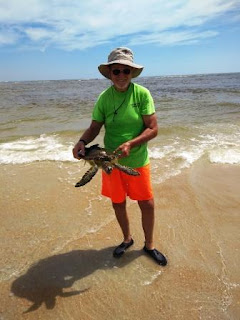 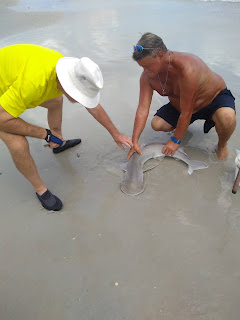 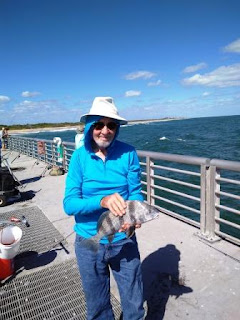 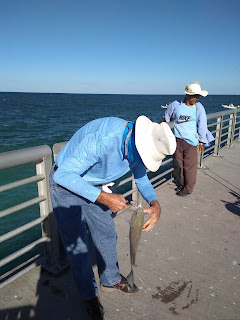 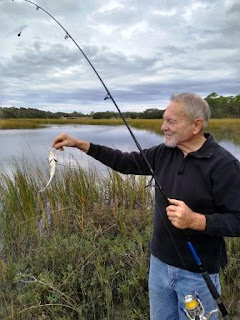 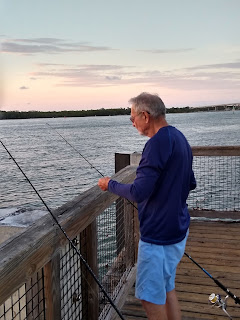 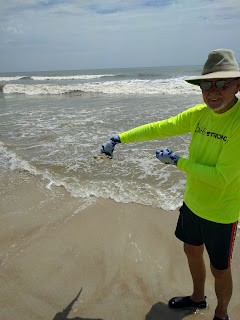 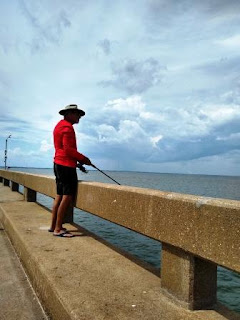 These anecdotes I have written about only highlight the many good times we had and how Jim changed me--and perhaps how I changed Jim. I became more tolerant, (I hope) more loving, and more flexible. I experienced new things with him—not only fishing and camping—but also things like enjoying going to the symphony and relishing the tastes of a wide variety of ethnic cuisines.

Oh, we had challenging times, too. But I don’t want to dwell on them. I want to remember the good times, the loving and intimate times, which were there right up to the end and will live in my heart forever.

Sometimes I sit on the back porch. Just outside the door are some wind chimes Jim recently restrung. He loved wind chimes; I usually thought they were annoying, although when I saw them in stores, I couldn't help but help them to ring.

These chimes I think are special: They softly ring in the gentle breeze. And when they do, I choose to believe that my husband is still near me, saying, “Listen! Aren't they beautiful!” And perhaps whispering in their notes “I love you.” 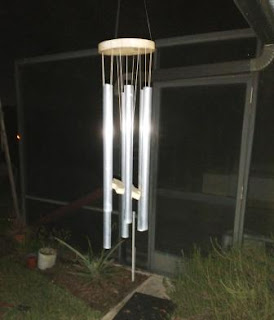