Katie is an awesome dog: She is smart. She is loving. She loves her walks. She lavishes me with affection whenever I am gone more than 15 minutes. She rarely barks, except to tell us she needs (or wants) to go out or if she wants to play.

Playing to Katie means going through her training routine; it’s a game to her.  “Katie, come!” “Katie, sit!” “Katie, place!” “Katie, up!” She especially like “Katie, up!” because this give her permission to jump up onto a chair or couch. (She rarely does this on her own.)

I sometimes get down on the floor to play with her, but this play is very limited, since she does not know (or care about) tug-of-war or fetch. I’ve purchased several different balls to try to get her interested in playing fetch. The only one she liked was a solid rubber one, which she started chewing. Rubber is not good for the digestive system, so that ball has been put aside.

Play time started to change last week after Jim and I adopted a kitten from the Humane Society.

I think the “play gene” is activated as soon as a kitten is born. Lex Luthor (the name the Human Society dubbed this tiny, 10-week-old black kitten) flits from one toy to another—or creates his own by grabbing (and untying) shoelaces, swatting electrical cords, and chasing himself around the house. He especially likes to play with little balls— fluffy greens ones, crinkly rosy ones, and plastic red ones with bells inside.

Katie has decided that if Lex wants to play with a ball (especially the red jingle-bell balls), she wants to play, too. 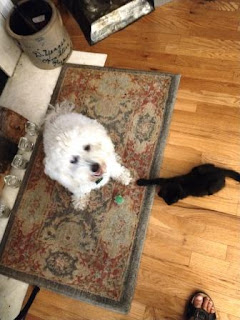 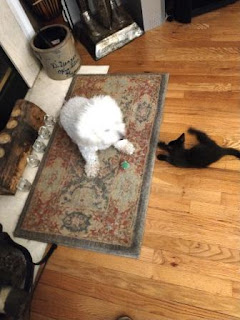 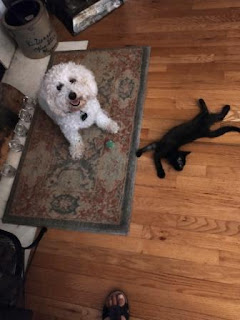 As soon as she hears Lex batting the ball around the floor, she comes up to him (no fear of cats) and she noses it away from him, nabs the ball with her mouth, and then tosses it into the air! When it lands, she quickly grabs it before Lex can get to it and takes it back to her “place”—an area rug behind the couch where we keep all of her chewies, unused toys, and grooming equipment. Once she has brought “her” toy “home,” she chews on it for a few minutes, and then disregards it. Play time over. A bit of jealousy?

It is fun to watch Katie and Lex together. As I have mentioned in other blog entries, Katie was raised as a breeder dog. She had no social skills—with people, nor with other animals. She barely knows what to do when she meets another dog. When she spies another canine down the block while taking a walk, she eagerly trots up to within a few feet of the dog. Then she stops. She lets the other dog sniff and check her out. Only occasionally does she reciprocate.

Because of she was cloistered for her first three years, she  does not know that dogs naturally chase squirrels, lizards, and cats. The squirrels and lizards in our yard are safe. When we come upon a cat during our walks, she stops to look but does not do anything else.

Given her lack of experience with cats, we were not concerned about her accepting even a grown cat, although an adult cat probably would not want anything to do with her. So, we decided a kitten would be a good choice.

Lex doesn’t know he is supposed to be afraid of this gigantic canine, and Katie doesn’t know she is supposed to chase this tiny feline. (Perhaps that will change if or when Lex lets her feel his claws.) The two are not best friends, nor are they yet especially playful with each other. But the friendship is new, and it is fun to watch as it grows.