Poochi was my companion for about 15 years.

I cried when I had to put him down, and for the longest time, every time that I saw a small dog that resembled Poochi, I would tear up. I really missed him. The cats were nice, but they were not dogs.

Several years ago, I think Jim realized I needed a periodic "dog-fix," so he volunteered me to take care of Mollie, our neighbor’s Yorkie, whenever they went out of town—just a couple times a year. Taking care of Mollie gave me a "fix" that would last me several months. (Getting a dog-fix is kind of like getting a grandkid-fix: You get to love them for a while, then leave them to their parents—the best of two worlds.) 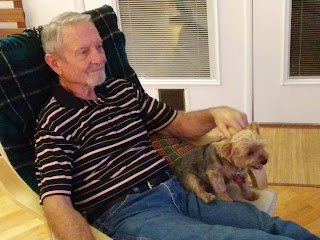 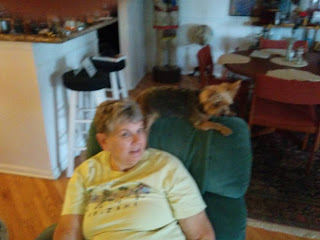 Mollie was the cutest little thing—very small—and smart. And she loved to play. For example, when Jim and I were using our computers in the office (in other words, not paying any attention to her), she would come in and yap until we would say, “Go get your toy!” Away she would go to fetch a squeaky toy, with which she would play tug-of-war and fetch until she got tired.

She was a good dog, but she did have the habit of barking to get attention. At times I could quiet her down by holding her on my lap. Other times, by playing fetch with a toy. But it seemed that in the early evening, she just didn’t want to calm down. It took us a while to figure it out: By 7 p.m., Molly was ready to go to bed, and she wanted us to go to bed, too!

Tommy and Joanne, Mollie's parents, were early-to-bed/early-to-rise people. Joanne actually left for work about 5:30 a.m. to avoid traffic, going into the city and returning home. Since she got up so early, they went to bed early—very early. And so did Mollie.

Jim and I, on the other hand, don’t go to bed until 11 p.m. or later. Once Mollie figured that out, she gave up and receded to the bedroom and her bed without us.

One time when Tommy asked us to watch Molly we had already planned a camping trip in our RV. Tommy didn’t care if we took her camping, so we did. I think she loved the experience, since she was able to explore new sights and smells. She was even content when we left her in the camper while we went fishing. 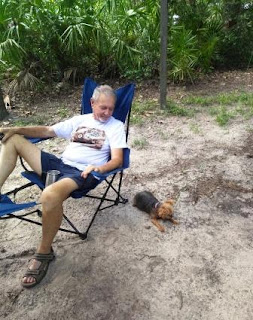 Toward the last time we cared for Molly, we saw that she had become virtually blind with cataracts. She still found her way around OK, but age was definitely catching up to her. If she wandered off, she would get lost—not because she didn’t know her way home, but because she couldn’t see to find it.

Finally, about two years ago, old age finally paid its final calling card, and Molly left this world. I was sad to see her go. She had satisfied my dog craving for many years. Now what would I do?

Email ThisBlogThis!Share to TwitterShare to FacebookShare to Pinterest
Labels: yorkie