Cats are Not Dogs

Cats are not dogs.
I knew that, of course, but I guess part of me expected my cats to act like a dog. Shortly after I moved to West Palm Beach in April 1998, I decided it was time to fill my house with a bit of life. Despite my son’s urgings, I was not ready to get a dog. But a cat…I thought a cat would give me companionship without the 24/7 commitment a dog requires. I made a trip down to the local pet shelter to see if any kittens were available for adoption. It was there where I found Charlie, a blonde, neutered male kitten. He seemed to like me, and I, him. 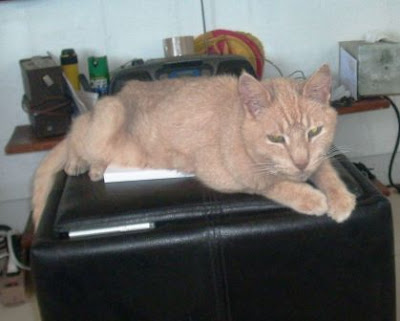 Charlie let me pet him; he sometimes would lie on my lap. He even let me give him pedicures, although that did not stop him from clawing my furniture.( In short order, a couch I had purchased in Chicago was in tatters. I didn’t like the couch anyway.)
Charlie also had the habit of jumping onto the screens on my screened-in porch. As he would hang there by his claws (probably in a vain attempt to catch birds or lizards), he reminded me of the tomcat Herman my parents had adopted when I was in college: Every night, in search of love or out of natural curiosity, he would wander the neighborhood. When he returned, he wanted back in the house (especially if it were cold outdoors). To get my parents’ attention, Herman would jump up onto the window screens of their bedroom. The funny thing, he always knew which bedroom they were sleeping in. (They had swapped bedrooms with the kids several times over the years.) One time I was babysitting my younger siblings when my parents took a weekend vacation. Trust me when I say that when Herman wanted back into the house, his midnight gymnastics were quite startling.
Dog are social animals. I assumed that cats were also. So, I believed that Charlie needed a friend to keep him company. A co-worker told me that a cat in her apartment complex recently had given birth (again) to a litter of kittens. Would I want one? She had one in particular in mind—a black, long-haired cat with green eyes. Why not, I thought. Good company for Charlie. So I picked her up and brought her home. 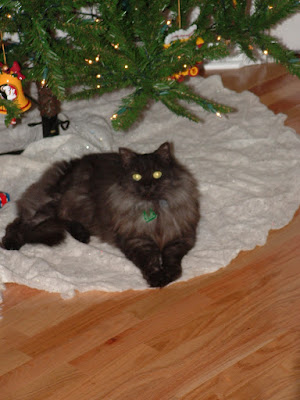 It didn’t take long to name her; at perhaps four months old, she was an independent warrior princess. I called her Xena. Xena did not like to be groomed. She also did not like to have her nails clipped. I decided that when I took her in to be spayed, she would get declawed. (Had I adopted her when she was younger, I could have trained her to sit for clippings.)
Xena’s independence was also evident. Or perhaps it was just her feline nature. She and Charlie only tolerated each other. They were anything but close friends. 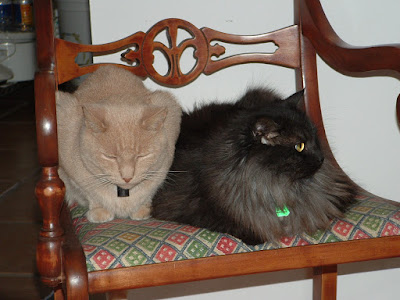 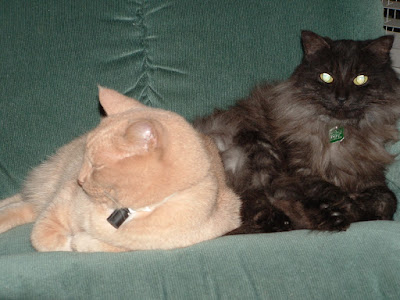 Despite their differences, Charlie and Xena were my companions, until Jim became part of my life. Then they were his companions, especially Xena. Charlie later adopted Jim’s mother (who had moved in with us) as his person, and would wait for her to come home from the senior center each day. They would then go into her bedroom and both would take a nap together.
When we moved to Jacksonville, Jim installed cat doors from the house o the porch and from the porch to the outside, so that Charlie and Xena could enjoy the outdoors. Later, when we began RVing, they became seasoned travelers. So they could continue to enjoy nature, we tried putting them on a leash; however, they were not fond of being tethered.
Xena never seemed to be a problem while traveling. Twice, though, Charlie was. The first time was when we left Tucson and drove a couple of hours to Bisbee, Ariz., where we planned to spend a couple of nights. When we pulled into the campsite and put out the slide, Xena was ready to have dinner. But where was Charlie? We looked high and low for him. How many places are there to hide in a 38-foot motorhome? We could not find him. Had he jumped out of the RV while we had been packing up in Tucson? Anything was possible. We called the campground we had left, and the host graciously looked around the area for him. No cat. Jim was despondent, but there was nothing we could do. If he had jumped out and run off, he had become dinner for some coyote. Saddened but hungry, we drove into town for a late dinner.
An hour later, we returned, and what did we find? Charlie sitting in my easy chair! We finally figured out that he had jumped in an opening, formed when the RV slide was pulled in, and hid behind the kitchen cabinets. From then on, whenever he disappeared, we knew where he was hiding.
The second time Charlie did his disappearing act was when we had planned a five-day trip within the state. We hunted high and low for him and could not find him. Finally, we had to leave. We packed Xena into the RV and left a big bowl of food and a two bowls of water for Charlie, under the assumption he would come home. Five days later, we returned. I went out onto the porch, and there he was, sitting in an easy chair, basking in the sun. He looked up as if to say, “About time you came home!”
The cats were with us for 18 and 20 years. Charlie was the first to go. Xena became a more loving cat once Charlie was gone. I finally learned that cats were not dogs.
Until later,
Your Reluctant ROVER,
Linda
at March 20, 2021