September 11, 2019—We are in Warwick, R.I., at Jim’s naval ship reunion. Today the group went on two tours.
The first tour was to the War College. I guess I vaguely knew there was such a thing as a war college, but I had never really thought about military leaders actually studying war techniques. We didn’t go into classrooms or meet any students. Our tour was a stop at the War College Museum. 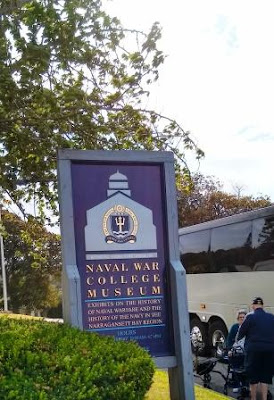 Because we had almost 50 people in our group, it was split into two parts, each headed by a volunteer docent who was going to guide us through the small, two-storied museum. (If we were on our own, we could go through the museum in its entirety in 45 minutes. Instead, we were there for two hours. And in our case, it was two hours of very boring lecture.)

Our docent, an extremely knowledgeable history buff, seemed intent on lecturing us on the entire history of the United States in a dull monotone. People (especially the women in the group) began drifting off. I tried to listen (Jim did better than I), but standing for such a long time was very trying and very tiring. I finally had to find someplace to sit down.

After some time, Jim and I decided to go off on our own. As we were browsing the exhibits, we ran into the other group, led by a docent who was also knowledgeable but who focused on telling the pertinent history as it related to the War College, in an engaging manner. We stuck with him until the tour was over and we went to lunch.
After lunch, the group was taken on a tour of the mansions of Newport, the summer haven of the rich and famous, both “then” and “now.” Most of the tour was by bus; the only stop we made—for about an hour and a half—was at The Breakers, the summer home of the Vanderbilts. Wow! The amount of money that was spent on that summer “cottage.”

Think Downton Abby—the Breakers is the American version of that mansion. In 1893, Cornelius Vanderbilt II commissioned the building of this 70-room summer home, which was inspired by the 16th century palaces of Genoa and Turin. No expense was spared: For example, one room’s wallpaper was ingrained with platinum, another with gold. The house was a case of conspicuous consumption. The intention was to create an American palace. Literally.
Jim and I have toured other mansions, most comparably the Biltmore, in Asheville, N.C. I think the Vanderbilt mansion was bigger and perhaps more ornate, but the tour we had at the Biltmore was more comprehensive, since we were able to see the servants’ quarters as well as the opulent living quarters of the main part of the house.
We might have been able to see or at least learn more, but we were not allowed enough time for the tour. Oh, well. We had a good time anyway.
Although visitors were allowed to take photos, my hands were full, holding the self-guided tour electronics, so I didn’t bother taking out my cell camera. I did take a few photos of the outside of the mansion, which fronts the ocean, with its breaking waves.
Tomorrow the group tour is to Boston.
Until later,
Your Reluctant RoVer,
Linda