On the way up to the reunion, we pretty much adhered to I95, only altering the course when “Garmina” (our GPS lady) told us to go a different way. I think we had programmed her to avoid as many tolls as possible, so she took us off the interstate through some areas we hadn’t planned on traveling—such as through Jersey City, the Bronx, and the Hutchinson River Parkway in New York and the Merritt Parkway in Connecticut. We were very glad that we were not driving our truck camper; manipulating it through the city would have been challenging enough, but on the parkways, we discovered that some of the underpasses were only about nine feet! (The truck camper is about 12 feet tall.)

One evening, Jim was talking about our trip to another reunion attendee. He said he never goes down I95, and he proceeded to tell us the route he takes when he drives south. When we got back to our room, Jim took out our atlas and planned a more scenic and less stressful (albeit a bit longer) route. We were glad we took it.

As a born-and-raised flatlander, I love to look at mountains—from a distance. (I have no desire to live in them. The closest I came to living in mountains was in the early 1970s when I lived in Connecticut, which has the Berkshire Mountains.) The route we drove home took us through the Appalachians, including the Blue Ridge Mountains. (See photos below). 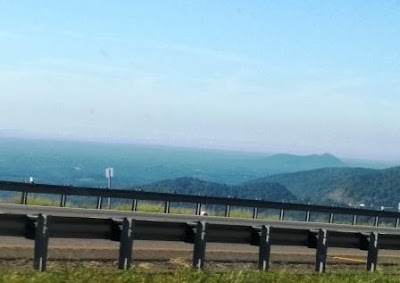 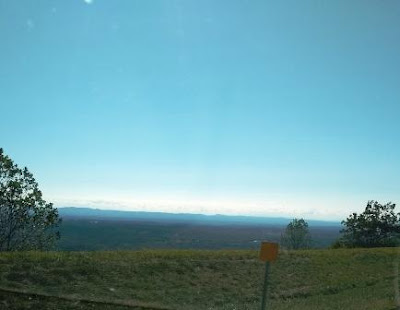 Our first day of driving was overcast and a bit rainy. The second day, however, was clear. As we started out in the morning, we could see mist in the valleys. The vistas were outstanding. Lest we forget that we were, indeed, in mountainous country, we occasionally would see signs warning trucks to brake and if their brakes were to fail, to use the runaway truck ramp plowed into the mountain side.
Two days on the road in a car traveling more than 1,200 miles is a test of relationships, but we survived it. We also survived some road rage: A woman entering the interstate pulled into our lane and almost sideswiped us. Jim blasted the horn and fortunately was able to pull out of the way. The woman then gave him “the finger” through her sunroof. She pulled ahead of us and slowed down. Jim tried to pass, but as he signaled, she pulled into the passing lane to stop us. This in-and-out went on for a while. And during it all, she smirked and kept giving us the finger. It could have been worse.

We both agree that we prefer traveling in our RV and taking our sleeping and eating accommodations with us.

We pulled into our driveway at 6 p.m. last night, after a 6 hour and 25 minute drive. We slept well in our own comfortable bed.

Until our next adventure,