August 18, 2019—I have lived in Florida since April 1998. Throughout those 21 years, the only hurricane I personally experienced was Irene, in 1999. A category 1 storm, its winds were a “mild” 75 mph, but brought with it torrential rainfall.

I remember lying in bed, talking on the phone to a family member, as the eye of the hurricane went directly over Palm Beach Gardens, where I was living. As the wind and rain died down, I finally lost electricity for a short time. My small yard was prone to flooding, but I had taken the precaution of placing sandbags around the doors. I had no damage from this mild ‘cane.

Two years ago, Jacksonville had a brush with Hurricane Irma, a category 4 storm, with winds up to 130 mph. St. Augustine, about 30 miles to the south and located directly on the water, received the brunt of the storm, and parts of Jacksonville were thoroughly flooded because of surges from the river and extraordinary high tides. I think we lost electricity for perhaps an hour or so, and we had no damage, not even branches down.

We have been lucky.

The residents in Mexico Beach, Fla., a small beach community that sits directly on the Gulf of Mexico in the Hidden Coast of Florida, were not so lucky last year. Hurricane Michael, a category 5 storm, literally wiped out the entire town. Few buildings on the coast were left unscathed.

For the last several days, Jim and I have been vacationing at Grayton Beach State Park, about 60 miles west of Mexico Beach. We decided to return to Jacksonville via the “scenic route” (U.S. 98), which partially hugs the coast and goes through Mexico Beach. We wanted to see for ourselves the havoc that Hurricane Michael wrought on the area. (Mind you, where we were staying, there had been virtually no hurricane damage from that storm.)

As we approached Panama City Beach (about 37 miles from the state park), we began to see signs of storm destruction, with roofs and sides of buildings torn off. It wasn’t unusual to see blue tarps covering leaky roofs. I tried to capture some of the devastation on my cell phone's camera as we drove. (It was a rainy day.)

Toward Tyndall AFB (after Panama City Beach), we witnessed the might of the storm: We saw a couple of hangars at the air base that were just shells; their roofs were gone, along with sides of buildings. Down the road, forests of pine trees stood with bare limbs and few needles on their branches. Those trees reminded Jim of the time when he survived a category 5 hurricane in Jamaica. He said that the palm fronds had whipped around so violently that they lost their green color. 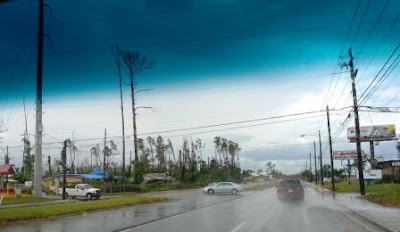 Another mile or so east of Tyndall AFB, we began to see a strange phenomenon: pine trees snapped in half. The really strange thing was that all of the trees were snapped like straws at essentially the same height, and all of them had been snapped by winds blowing out of the south. However, a little farther down the road, we saw the same situation—snapped trees—but these trees had been broken by winds coming out of the north! Obviously, Michael’s gales came from all directions.

We finally reached Mexico Beach. We were disappointed that we could not go downtown, because the road was barricaded. I suspect that downtown buildings were either being razed and/or the road was being rebuilt. As we detoured inland, we could see fewer buildings in disrepair, but blue tarps were still very prevalent. And back on the highway, where there used to be condos and houses, now stand vacant lots. 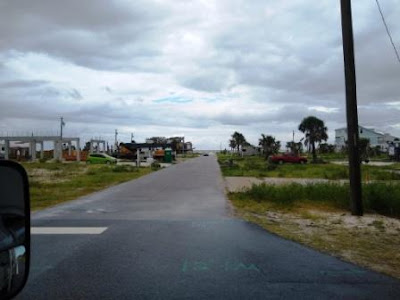 We continued to see devastation for a few miles east of Mexico Beach, but then it suddenly stopped. It was as if the hurricane had never existed.

Our hearts go out to those who are trying to recover from Michael’s wrath.

So far, this year we have not had any hurricanes hit Florida. Let’s hope our luck stays with us.