Beautiful clear water, but no fish

August 16, 2019—We decided to surf fish today. It was a rare day in which the warm water was an emerald green in the shallows and deep blue past the sand bars. Aside from seaweed, the water was crystal clear. Usually, clear water means good surf fishing, but not today. All Jim caught was a tiny little jack crevalle. I don't think we even had any other bites!

We had fun any way, and although the temperature was in the mid 90s, our umbrella and a sea breeze kept us comfortable. 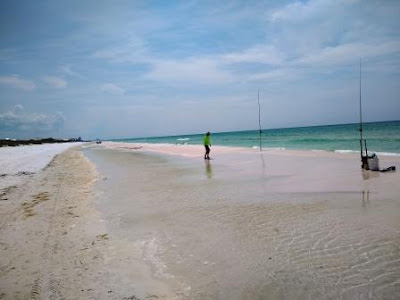 We were amazed, however, at the thoughtlessness of beach goers.

As anglers, we are considerate; we walk down the beach away from any bathers. We would not want anyone to become entangled in our lines or caught by a hook. However, we weren’t fishing very long, however, when a group of teenagers (I think it was some type of church or community group) led by a man jumped into the water with boogie boards. They were very near our lines. We finally got their attention and all but one (stubborn) girl relocated away from the lines. (She finally got out of the water.)

An hour later, a mother with her two young kids walked by us and plopped down about 10 yards from us and decided that was a good place to play in the waves. They were oblivious that the current and wave action were slowly taking our lines in their direction.

We decided to give up. The fish weren’t biting anyway…why get in a hassle with swimmers?

We reeled in the lines and decided to take a dip ourselves. It was the first time in probably seven or eight years that I have swum in the sea. The last time was when either my son or my daughter and their family were visiting. Wave-hopping isn’t my favorite pastime, but we had great fun anyway.
We went home, rested, and we are going back to the pier on the bay later. The last two days we have fished off the pier and have caught some croakers—not many, but enough for dinner. Maybe we will add to their number before I cook tonight.