Yikes! Campground has no internet--again!

July 27, 2019—One of the aims of many people, when they go camping, is to get away from it all. The Florida state park system seems intent on making that happen. No internet. No cell phone signal. Isolation.

We arrived at Fort Clinch State Park, about an hour north of Jacksonville in Fernandina Beach, which is situated almost on the border to Georgia. (Yes, Jacksonville is that far north! We are really in southern Georgia, for climate and culture.)

This is a very nice state park: Shady campsites, and although they are close to one another, the trees give a semblance of privacy. The roadways are tree-canopied, with Spanish moss hanging from the limbs and giving a glimpse of what Florida was before Disney.

The sites are not nearly as big as they were at Saint George Island, where many campers bring boats, but ours is adequate. The shower house is a short walk. In contrast to all others we have used, this one is air conditioned—a nice amenity. 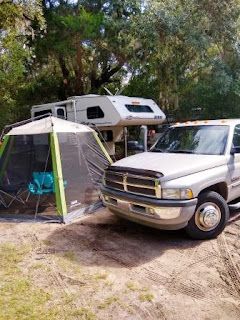 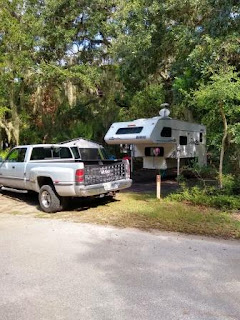 The park is the home of Fort Clinch, a 19th century brick fort built to guard the entrance to the Amelia River from invaders arriving via the Atlantic Ocean. We will probably tour the fort tomorrow. Inlet areas on both the east and west side of the fort provide good fishing. There is also a fishing pier a bit farther up the river, as well as a beach on the ocean, where we can surf fish. 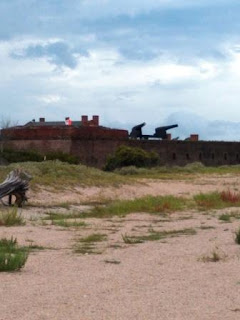 It is the lack of internet that I bemoan, as well as the fact that we can get few TV channels. We are just north of Jacksonville and should be able to pick up all the Jax stations, but no. The only network we get is CBS.

The fact that we have no internet means that I will be posting these blogs after we get home.
Our stay here is only for three nights. If the fishing is good, however, we may return, since it is close to home yet allows us to get away.

Tomorrow, we dip our lines. Wish us luck. We always enjoy trying to entice the fish to our lines, but it is much more fun when we can pull them in!