July 29, 2019—It was a good day of fishing. We caught around 20 fish (albeit all small ones) and kept 15. We do not know the names of what we caught, but we are sure that none was a protected species. We decided to have a massive fish fry at home. Those little ‘uns have a lot of bones, but they sure are good eating.

One of the 15, however, we tossed to the seagulls once Jim had cleaned it. I suspect it is a variety of ladyfish, a species that are fun to catch but not real tasty. (As soon as we have an internet connection, I’ll do some research and see if I can identify it.) The ladyfish we have caught elsewhere were essentially black, not mottled like this one. And they had larger eyes. However, this fish was elongated, like ladyfish, and had somewhat bulging eyes, very similar to the ladyfish we have caught in the past. 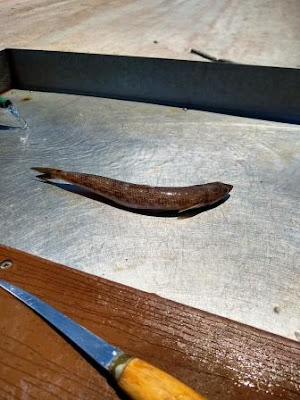 Ladyfish are not filleted or cooked like “regular” fish. Their flesh is mushy. (So was this fish’s meat.) To use the fish, it is recommended to freeze it for a couple of hours, then fillet, but instead of skinning it, to take a spoon and scrape the flesh off the skin. This pulpy flesh is then used in fish cakes. I made some fish cakes from ladyfish. The recipe I used was not worth repeating. However, I would try another recipe the next time we catch a mess of them. Like I said, they are really fun to catch.

We fished until the bait was gone. This time, we were on the Amelia River, away from the inlet, where we were yesterday. We agreed that we would like to return here. The campground is very nice; the wash house is air-conditioned; and the fishing is good.

Tomorrow we return home, a “long” journey of about one hour. After we pack up, we will stop at the fort and tour the museum. Not sure if we will go into Fort Clinch, however. We have been to several forts around Florida built in the same time.