Wrapping up our vacation

We returned to the fishing pier today where we had had success two days ago. (Yesterday was a rain day. After “fixing” the truck—by filling up the fuel tank—we stayed in all afternoon as the rain came down.) Although some people on the pier were catching black-tipped sharks and a few larger species, such as flounder, we knew those fish were not abundant, so we decided to concentrate on catching more croakers. Those little fish are fun to catch, and more important, delicious to eat.

My first catches of the day were a couple of ladyfish and catfish. Most anglers condemn ladyfish as trash fish and throw them back or use them as cut bait. We have learned that no fish is trash; all can be eaten. Some are just better tasting than others. When we were in Sebastian Inlet in May, we caught a number of ladyfish and learned how to clean and use them to make fishcakes. The fish are fun to catch, but today we decided we didn’t want to mess with their special cleaning (they need to be scraped, not filleted), so we tossed them back. Likewise, the catfish. Saltwater catfish taste about the same as freshwater catfish, but cleaning them is not as easy as filleting other fish. We let them live for another day to steal bait from another angler.

We ended up catching (and keeping) 18 croakers. We would have caught more, but we ran out of bait. Those 18 will be enough for two dinners for the two of us. Yum!

***
Despite the beauty of the white sand beaches and dunes, we won’t be coming back to this state park. It just doesn’t have enough to offer us. 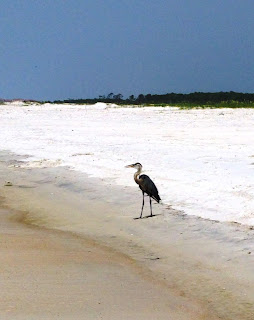 Our campsite is spacious and shady. That’s good. It is also near the shower house. The walk to the gulf from the parking lot is relatively short (unlike the walk to the beach at Anastasia Island State Park). I think those are about the only good things I can say about this park.

Although it has miles of beach and several dedicated beach-access areas, parking is inadequate, especially for anglers and campers. Each access area only has about a half-dozen non-handicapped parking spaces. It is not possible to park alongside the road, because the shoulders are sand. Signs distinctly state that the sand will not support vehicles. Even if you could park alongside the road, it wouldn’t be possible, because almost all of the land between the road and the beach (except for the beach access areas) is roped off—prohibited--to protect shore bird and their nestlings.

The park is bounded on the south by the gulf, on the north by the bay or sound. (I don’t know the technical term for that body of water.) The park has two boat ramps to the sound. But there are no fishing piers, and no access to fishing the sound from the shoreline. Except for the one day we did surf fishing, we went “off base” to fish at the pier in town.

We have visited many state parks during the last two years. Because of the limited capacity of our RV’s holding tanks, we use the public facilities to shower. Some of these facilities have been very old and in need of repair and replacement of shower heads. Others have been newer. Most have been very clean. This shower house is wanting in cleanliness. I won’t go into specifics, but I don't think it is too much to expect toilet stalls to be clean and mildew to be removed from the shower walls.

If we were to return to this part of the Forgotten Coast, we would stay at St. Joseph State Park near Port St. Joseph, rather than here. Unfortunately, that park was hit hard in the hurricane last year and is not yet open for camping.

In August we have reservations at another state park on the Forgotten Coast, in Santa Rosa, Fla., which is near Pensacola. I hope we will not be disappointed in the facilities or the fishing.

Despite the limitations of the park, however, we had a wonderful time. It is always relaxing to get away from the day-to-day chores that confront us at home, even if our camping experience isn’t all that we had hoped it would be.

Until next time (when we return to Faver-Dykes State Park, near St. Augustine), I am