Verdict on the truck camper...great!

June 5, 2019—We are at Anastasia State Park, in St. Augustine, Fl. Our first night in our “new” truck camper has passed. It was nice. 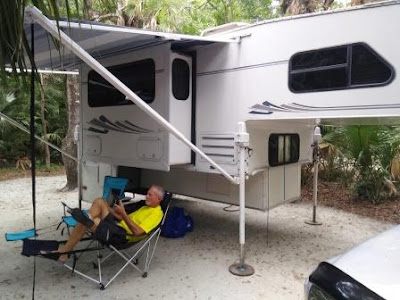 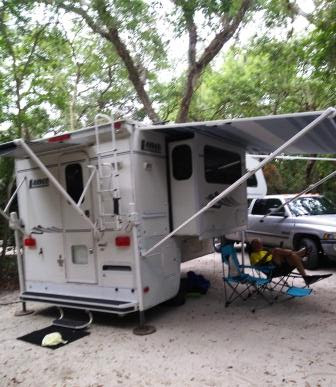 Thor, our 27-foot Class A motorcoach (which is at Campers Inn in Jacksonville, on consignment), had essentially about 17 feet of usable cabin space, plus the bedroom, but it was only 8 ½ wide. Lance, our truck camper, is overall 20 feet long, from the head of the bed (which is elevated) to the door. The cabin area is roughly 12 feet long, but this area has a slide, which makes the living area much wider than Thor’s. That extra width in the cabin area makes all the difference for comfort.
In Thor, we had to set up a table every time we ate. In the truck camper we have a dinette table. I have adequate space to cook, and if I need more, I can use the table.

Storage? The camper has less than Thor, both inside and especially in the “basement.” But it is adequate for our needs.

Since we purchased this camper a couple of weeks ago, Jim has been busy. We bought a 24” LED TV, to replace the 12” antique that was in the TV cabinet. He was able to modify the built-in articulating TV stand to accommodate our new TV, so the television can be viewed from both the cabin as well as lying in bed.

Jim has changed out most of the lights to LEDs for energy efficiency. We put up a magnetic strip, which holds all the knives and some utility kitchen items. That small innovation has freed up drawer space, which is in short supply.

We also took up the camper’s blue carpeting in the cabin. Beneath it was “virgin “white linoleum. Not attractive, but much easier to keep clean. Eventually, Jim will probably lay some tile planks that resemble hardwood flooring. Not a high priority, though, since the linoleum is in good shape.

The truck has also been the target of some improvements. We discovered that the cruise control did not work. A trip to the mechanic fixed that problem. Jim installed two wireless back-up cameras—one on the truck and one on the camper. These cameras improve safety on the road and make it easier to back the truck in order to load the camper.

The first week we had the truck, Jim installed new airbags—not the kind used for safety (the truck has those of course), but the kind that eases stress on the truck’s springs and creates a more comfortable ride. (The truck had air bags, but they were not functioning.) Also, before we even brought the camper home, Jim purchased some quick-release tie-downs. (The camper has to be “tied down” to the truck. The quick-release tie-downs allow fast set up and tear down.) We found that it was not very difficult to put the camper on the truck and was even easier to set it down in the campground.

Still to be done: a new radio in the truck. The current radio does not have Bluetooth, nor does it have an auxiliary jack. We like to listen to audio books when we travel, so replacing the current radio is a priority that Jim will address in the near future.

All in all, we are very pleased with our purchase. To be sure, this truck camper would not have met our needs nine years ago, when we purchased our first RV. Then, we wanted to do longer travel. (Jim wanted to live in an RV full-time. Not me.) We needed the space we had in our first RV, which was 38 feet long. The second one was 40 feet long. Thor was, as I said, 27 feet. Perhaps, if Thor had had a different configuration, we might not have put it up for sale and bought this truck camper. But, needs (and wants) change.

Now, if only the motorhome will sell quickly at the RV dealer!
***
It was fortuitous that we had this camping trip to Anastasia State Park in St. Augustine planned prior to our buying the camper. The campground is less than an hour from Jacksonville, so it was a good place for our first trip.
I can’t say that I am too impressed with this state park. The sites are very nice, private, and shaded. But to fish on the beach requires walking a great distance. Neither of us is fond of walking far on sanding beaches. Also, although there is an inlet where it is possible to fish, there is no boat launch, nor is there a fishing pier. I don’t think fishing along the bank will be very inviting. (We did not bring our boat for this trip.)
We drove to the St. Augustine pier today. Fishing was poor. Although each of us caught several small fish, most were too small to keep. Two (species unknown) made it to our dinner table tonight. I also caught a baby shark. By baby, I mean very small, only about eight inches long. If it survived our release, it will grow up to menace other fish, hopefully not humans.
We may go back to the pier this evening, to fish on the incoming tide. Hope the catch is better than this afternoon.
Until later,
Your Reluctant RoVer,
Linda