Lots of smilin' (or is it smirking?)

May 7, 2019--We received a few smirks and smiles today. We didn't care; we were happy campers as we took our first boat ride in our Porta-bote.

The Porta-bote is unlike any other type of boat most people have seen. Unfolded with its seats in place and a motor on the back, in the water, it looks pretty much like a skiff or a jon boat. But when it is being hauled on its own wheels behind a truck...well, maybe those smirkers (especially those with 20-foot fishing boats) are right. Our Porta-bote is quite a sight.


We actually made two trips to the river. The first one, we launched the boat (no problem). Jim then tried starting the engine. It was frozen up. He couldn't pull the starter. So, we hauled the boat out of the water (again, no problem) and back to camp. Jim quickly found the source of the problem--something about oil seeping into the combustion chamber while the motor was resting on its side (per manufacturer's instructions). He drained the cylinder, dried the spark plug, and was able to start the engine. (Have I mentioned that my engineer husband is a mechanical genius?)

After lunch, we headed back down to the boat launch. This time, the launch went even more quickly, and after a couple of tugs, the engine started. We were off!

But then the engine stopped. Start, stop. Start, stop, Several times. During some of the stops, we fished. We each caught a hard-head catfish (thrown back). We headed in.

More research. What was happening? The engine itself worked flawlessly, but something was happening with fuel delivery from the auxiliary gas tank. Jim finally found the problem--a small crack in the part where gas is sucked up from the tank into the hose. We drove into Melbourne to a West Marine to see if it had the part. No such luck. We will either have to try to order the part from the manufacturer or get a new aux gas tank. That doesn't mean we can't use the boat: The engine has a built-in gas tank. The aux tank just allows farther traveling.


***
We went back to the fishing pier after our trip to Melbourne (about 20 miles away). The lady fish were again feeding. Jim caught one; I caught two, and another fisherman gave us one. Those lady fish are really fun to catch! Lots of fight. 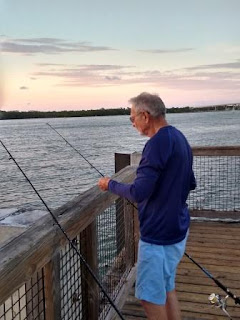 Lady fish are reputed not to be the best-eating fish, mostly because of their soft texture. We researched cooking them, however, and found that this fish is widely used (especially in Asian cultures) to make fish cakes. Instead of traditionally cutting and skinning filets, you use a spoon to scrape away the mushy flesh. Combine the mush with bread crumbs and seasonings and pan fry, and you get fish burgers similar to the kind you buy at McDonalds. We have frozen our lady fish and will try out the recipe in our fully equipped kitchen when we get home.

While we were cleaning the fish, however, some fishermen who had gone "way off shore" to hunt yellow-fin tuna but only succeeded in bringing in many black-fin tuna, joined us at the cleaning table. As the guy was cleaning, he offered us a couple of big tuna steaks--probably close to two pounds! How generous! Last year fishermen in Georgia gave us a couple pounds of freshwater catfish. Those who have a great catch share.

Needless to say, we are having a great time. Bone tired and achy for overexerting, but wonderfully relaxed. And the sunset tonight was spectacular. 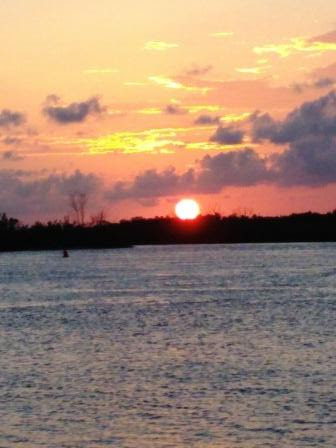