A new chapter in our RVing story

May 19, 2019--Last week I posted that we listed and sold our little 2004 Nissan Frontier truck in one day. (Thank you, Craigslist! Well worth the $5 posting fee.) Why did we sell the truck? We had purchased it only a few months ago to be used as a vehicle to haul our fishing equipment and to "tow" our boat to the boat launch while we were camping. Jim had replaced an oxygen sensor, the alternator, and the radiator. The truck was in great shape; it ran well. So why sell it?

Let me give you the back story: We have been RVers for almost nine years. Our first motorhome was a 1998 38' diesel pusher with one slide. Excellent engine, but we wanted more room. Bigger is better, no? So, after a couple of years, we traded up to 2005 40' diesel Country Coach that had three slides. Opened up, it was as big as a New York apartment. We really loved the room that motorhome provided. Jim loved to drive it. But, it was plagued with a variety of problems, and we finally decided to sell it about 18 months ago.

When we decided to sell "Junior," we realized our RVing lifestyle had changed. We were no longer interested in taking extended vacations, as we had done three times in the big coaches. So, when we sold the 40-footer, we downsized to a 27' Thor RUV--a recreational utility vehicle. The size was good; we could get into small RV sites at state parks. It didn't take us long, however, to realize that the configuration of Thor did not work well for us. Its single slide was in the back, to allow for a queen-sized bed. The cabin/kitchen area was narrow and not very comfortable for cooking or for watching TV. We regretted not purchasing an RUV with a slide in the cabin/kitchen.

Also, we became interested in boating. It is possible to tow a boat behind an RV, but you can't launch one using an RV. (At least, we weren't going to try.) Hence, we purchased the Porta-bote and the little truck. We could carry the Porta-bote on the truck, which we could tow.

Towing the truck with the Porta-bote solved the boating problem, but we were still confronted with the challenge of the configuration in Thor. We just didn't like it.

We began to think about other solutions, including a truck camper.

Truck campers are probably the granddaddies of RVs. The camper slides into the back of a big pickup truck. The camper can be left in place, or can be taken off the truck as a stand-alone camper while RVing. That allows the truck to be used for other purposes, such as site-seeing or launching a boat.

In our search, we were pleasantly surprised to learn that many truck campers have slides (to expand living area) and even dry bathrooms. (For the uninformed, a dry bathroom is one that has a separate shower. A wet bathroom, common in Class B and many truck campers, is a small bath in which the whole room converts to a shower.) 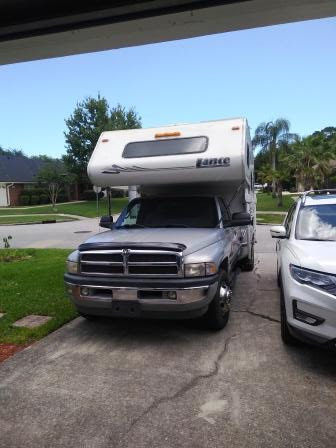 New truck campers come with a healthy price tag, plus you need a big full-sized truck to carry them--another high cost. New was out of the question. We started looking (casually) at various websites for used truck campers and trucks.

As luck would have it, Jim found an ad on eBay for a truck camper as well as a truck--located in Jacksonville. Last Sunday we took a look and fell in love. We bought the package, for an excellent price. We didn't have to mortgage the house to buy them.

The owners (a rabbi and his wife) had purchased both the truck (a 1999 Ram 3500) and the camper (a 2003 Lance 1121) new. They were meticulous owners and were only selling because their health no longer allowed them to camp.

The truck is a diesel with only 90,000 miles on it. (Diesels are hardly broken in with that type of mileage.) It is a dually, which means that it has four wheels on the back. The camper is the largest that was built back in 2003. Although the camper needs some upgrading, it is well made and can be used as is.

The interior of the camper provides a lot of living area and will be much more comfortable than Thor. No, there are no easy chairs in it, but the dinette's cushioned couches are comfortable to recline on, while watching TV. (We do have to buy a TV. The one that was in it was pre-LED.) It has quite a bit of storage (I think more than the newer truck campers), including a pull-out pantry. It has a microwave, three-burner gas stove, and a gas oven. It also has a dry bathroom, should we wish to shower "at home" instead of in the campground shower facilities. The bed, which is over the truck cab, is queen-sized.

In addition to providing us with a more comfortable cabin/kitchen area, the truck camper will allow us to tow a boat. Who knows? Perhaps we will get a "real" boat in the future.

Our task this week is to sell Thor to a dealer, unless we miraculously get an offer from Craigslist or Marketplace within the next couple of days.

Our RVing journey continues, but in a direction we would not have considered when we started nine years ago.

Until next time (when I report on our first adventures in our "new" RV),