Sebastian Inlet, about three hours south of Jacksonville, is a fisher-persons's paradise. The area used to have a thriving commercial fishing industry. A change in fishing laws (to protect from over-fishing) as well as a hurricane put an end to commercial fishing. However, the inlet is a haven for sports fishing.

I reported that on Sunday we went down to the jetty and watched people haul in HUGE fish. One young man pulled in a snook that had to be three-feet long. (If it was that long, he had to throw it back. Snook is a slot-fish. Only those between 28" and 32" can be kept.) "Ah," we thought, "we will finally catch some fish!"

Yesterday was a different story. In the morning, we fished off a fishing pier on the lagoon in the state park. I almost immediately caught a fish...unfortunately it was a little pin fish, about 5 inches long. Pin fish are bait fish. I decided to cut it up and use it as bait.

In a little while, I had my second catch: a good-sized hardhead catfish. It was big enough to offer some nice filets, but we decided to toss it back. Saltwater catfish are considered trash fish. We subscribe to the theory that all fish are edible. Some are more tasty than others, however. The hardhead is not bad to eat; it's just not delicious.

I had been fishing with bait; Jim had been using artificial lures. He finally switched to bait after the pin fish nibbled away at two or three of his soft lures. His only catch? A starfish. Obviously not edible, but interesting!

The morning was highlighted by a manatee that decided to brunch on the underwater greens near us.

During the afternoon's outgoing tide, we went back to the jetty. We took a position on the ocean-side of the jetty, about 10 feet away from an Asian couple.

That man and woman snagged fish after after! Within 20 minutes, I swear that had caught 20 fish. Many were jack crevalles, a fish that many (again) consider trash.  This fish has no size or quantity limits. I caught two, one which was too small to keep. Jim caught a small one. 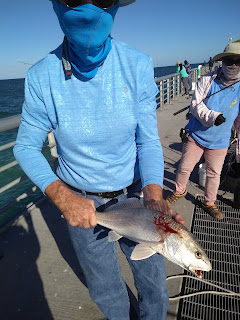 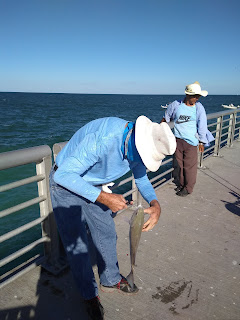 The prize for fishing in our family, though, went to Jim: He caught a 19 1/2 inch red drum--the first red he has ever caught in his 81 years! A bit later, he caught another red, but it was undersized. (They must be between 18" and 27" and only one per person is allowed.)

We left the jetty around 5 p.m. and stopped within the park to clean our catch. The cleaning table had running water. Waste water (and any scraps) rinsed down a pipe into the lagoon. Three big birds (a species of egret, I believe) waited at the end of the pipe. They actually fought after a piece of waste! But all of them went away well fed. 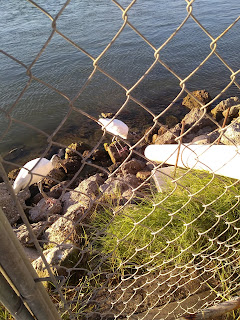 One last day of fishing. I hope it is profitable for our dinner table tonight. Dinner last night was delicious.