How We Are Spending Our Summer Vacation

Today we spent part a while in jail...or more precisely, in gaol. 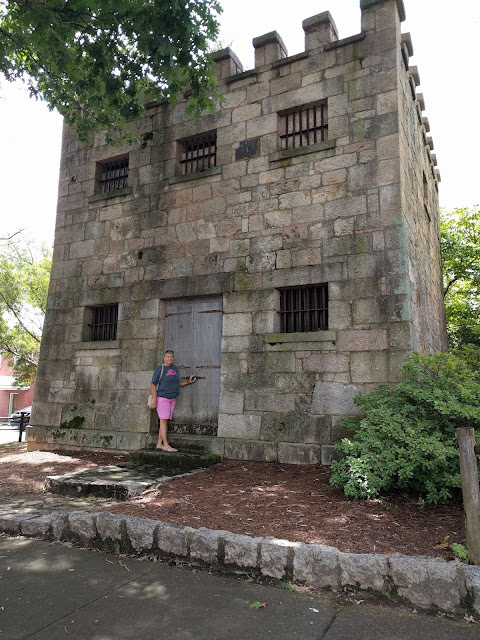 The town of Greensboro, Ga., has a rich history. Its streets are adorned by well-maintained old houses (some of which are mansions). The town center boasts a number of restaurants, boutiques, and antique stores, all of which are open during reasonable hours. It also has a museum, an old jail that housed many a bootlegger, and a really old gaol, built in 1807. The museum, unfortunately, is only open by pre-arrangement. The current sheriff is the only person who has a key to the old jail. And the old-old gaol is open only if you ask the Chamber of Commerce president for a key. (We found that out accidentally, when we visited the Chamber to get tourist information. The gaol itself does not have any information posted on how to enter.)

Sometimes you wonder if these tourist towns really want tourists.

But I digress. We did get the key to the gaol, which is a very interesting piece of history.
It is built of rock granite, with walls two feet thick. Here is what the web site details about the gaol:

"The building is patterned after European bastilles. The downstairs cells are like European catacomb cells. Prisoners in the cells could be chained to the wall. They were given a bed of straw, a tin bucket for a toilet and a candle. There was no other light, no heat and no ventilation. People arrested for non-violent crimes were sometimes put in the upstairs room where they at least had light.

The legal method of execution in Georgia was handing from 1735 to 1924. The gallows and trap door of the Gaol are just as they were in the 1800s. The hangman stood on the steps, pulled the lever, and the trap door fell away.

The Gaol was used until 1895 when a new jail was built next door. The new jail combined a detention facility with the sheriff's residence. Recently renovated, it is now the L.L. Wyatt Museum, housing memorabilia from Greene County's law enforcement history. Open by appointment." 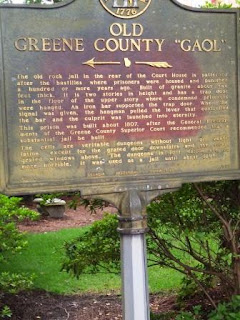 Standing in the gaol, you get a very real feeling for how the prisoners were treated. It was not a nice place. It is a good tourist attraction, however. Too bad the town doesn't make it more accessible to visitors.

When we visited Eatonton, Ga. the other day, we found a little gem of a museum, right in the Chamber of Commerce office. As we were asking about things to see around the area, I spied an old-time soda fountain through some glass-paneled doors. The receptionist said it was the Old School History Museum. It contained a representation of the early years of downtown Eatonton, with a facade of a grocery store, theater, bank, barbershop (I even sat in the barber chair, just like the one my dad had, years ago!), and dry good store.

The museum also had arrowhead collections, photographs, and various old advertisements and articles from its Civil War newspapers--all very interesting.

We also found another free museum, the Lake Country Discovery Museum, sponsored by a bank. There we learned more about how Lake Oconee was formed by the Georgia Power Company, which not only provides hydroelectric power to the area, but also runs several parks and recreation areas, including three that have campgrounds. Camping in these areas is right on the lake. The well-maintained campgrounds provide electric and water hookups, as well as a dump station. Should we ever want to return here in an RV, we would stay at one of these campgrounds, which are superior to where we are now, and a much more reasonable cost.

Our week here is free. This remains a KAO campground, but is being turned into a members-only resort. (They have a LONG way to go before it is really a resort.) KAOs typically cost around $50 a night. Camping in a Georgia Power campground is only $25 a night.

Museums are interesting. Fishing is better. But when it is raining, you don't feel like fishing. So, yesterday afternoon we headed to the movies, where the senior special before 6 p.m. was $6. We chose to see "Mission Impossible." We wanted to return today to see the Jurassic Park sequel, but we discovered that the movie roster had changed. Ah, well.

We will try our luck at fishing again this evening. Last night we each fed the fish a 15-course dinner. Maybe we'll be luckier tonight. Tomorrow we will take a drive to Georgia's first capital city, Milledgeville, in search of more history.