What we did on our monthly vacation

November 16, 2017--Some people claim that when you are retired, you no longer take vacations; you travel. Not so for Jim and me. We are so busy at home, with various projects (fun and not-so-fun) that we take vacations to get away from it all, just like we did when we were working. (Actually, I never had the opportunity to take real vacations when I was a single parent, so our retirement vacations are infinitely better!)

A few months ago when we bought our RUV (recreational utility vehicle) "Thor," one of the caveats we made was to travel at least once a month. These short breaks from routine would be taken mostly in Florida, and the most economical way for seniors to camp in Florida is to make use of our state's superior state park system. (Senior residents get to camp at half price, which is usually about $12 a night. Can't beat that rate.)

This week we camped for four nights at Paynes Prairie Preserve State Park, a 22,000 natural wilderness. Entering the preserve is like going back in time, to old Florida, with its rich biodiversity of both flora and fauna, including huge live oaks decorated with Spanish moss, long-leaf pine trees, golden flowers, alligators, all sorts of birds, deer, bison, wild horses...and of course the prairie. 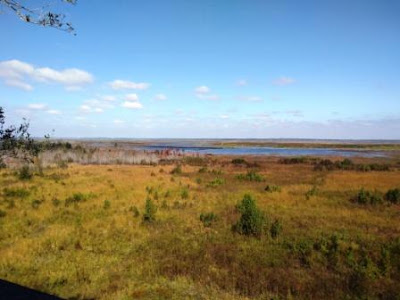 When we first saw the prairie, I could have sworn we were back in Illinois. It is so unFlorida-like!

The state park is located about 10 miles outside of Gainesville, in Micanopy, a quaint small town that has survived and thrived as an antiques center. Because the shops don't open until 11 a.m. and the local museum doesn't open until 1 p.m., we meandered around the town. Many of the houses were large, old structures, nicely restored and maintained. 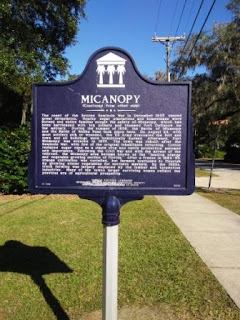 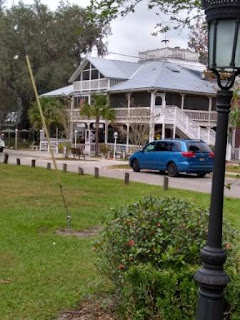 Our wanderings on the outskirts of the town led us to a park dedicated to the area's Native Americans. One section of the park was fenced in to protect burial mounds. We were lured to a building marked "museum" but were disappointed to find that it was locked up and apparently no longer used. In fact, the entire park seemed to be rather neglected. One interesting thing we found, however, was a large bat house on its premises. It wasn't as large as the bat houses in an RV park in the Suwannee River area, but it could host a lot of bats. 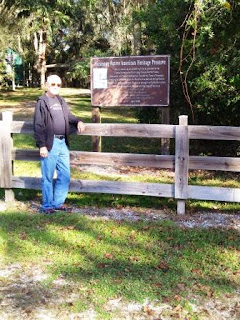 I had never been to Gainesville, the home of the University of Florida, so we drove into the city. UF is about the size of Indiana University. It would appear that the town grew around the university, which is very spread out. As we drove through the campus on city streets, a large banner announced a 100-year celebration of the Florida State Museum of Natural History, which is manned by UF personnel and located on campus. What a treat! No entry fees, and several of the exhibit areas abutted  the laboratories of "real" paleontologists, who gladly allowed visitors to interrupt their meticulous fossil-cleaning to answer questions.

Today we drove out to the Dudley Farm Historic State Park, a working farm, whose website description says it is listed on the National Register of Historic Places. It is "an authentic working farm" that shows the evolution of Florida farming from the 1850's to the mid-1940-s "through three generations of the Dudley family." The farm has 18 buildings, including the family farmhouse with its original furnishings. It even has a functional cane syrup complex. Today, the workers were making cane syrup, just as it had been made 150 years ago. 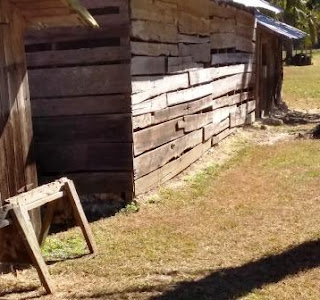 One reason we chose Payne Prairie State Park was because of its lake and the possibility of fishing for bass, bream, and other species. The park recently completed a very nice fishing pier. Since we are not yet able to haul our kayaks on our new car (we need roof racks), we were glad to have the pier available. 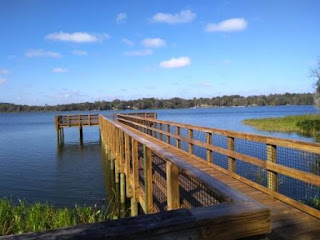 We fished and fed the little critters a great buffet each evening, but the only thing we caught was fun.

Until next time (which will be soon),