November 29, 2017—Blue skies, a sugary white seashore, soft waves breaking on the beach, temperature in the mid-70’s, and glorious sunsets—if paradise has a definition this is it. 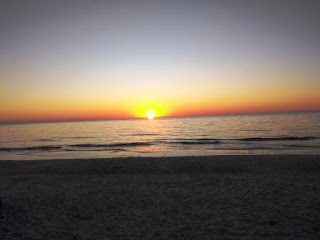 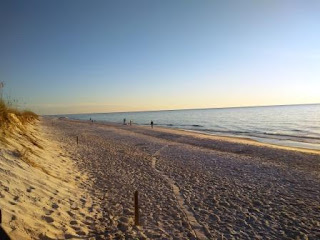 Marketers divide Florida’s coastline into a number of different segments: The First Coast (where Jacksonville is). A bit farther south is the Treasure Coast (where many ships, including pirate ships, have sunk in angry seas). Then there is the Space Coast (Kennedy Space Center), and the Gold Coast (wealthy Palm Beach, Miami and Dade counties). You get the idea.

My favorite is the Forgotten Coast, along the gulf shores from Florida’s “arm pit” westward. It is called the Forgotten Coast for two reasons: Few tourists deliberately travel to this area. And, the population of its “big” cities remains fairly small: Pensacola (on the far western edge of the panhandle) only has 57,000 people. Panama City) boasts a population of around 38,000.

We are staying at T. H. Stone Memorial St. Joseph State Park outside of Port St. Joseph on the Forgotten Coast.  Our campsite is only yards from the park’s 9.5 miles of white, sandy beaches, where we have been fishing (without much luck, alas). On the backside of our campsite, separated by a marsh, is St. Joseph Bay, a shallow body of water which also purports to have an abundance of living seafood.  (We have yet to fish there.)

Fishing has not been great (so far, I have caught our only fish, a smallish whiting),  but relaxing has been wonderful.  And nothing can beat that. 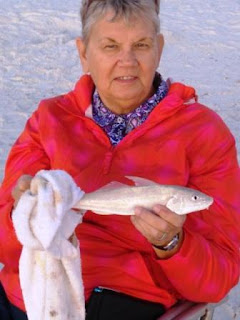