How many cars can you buy in one week?

Most people—if they wanted to buy a car—would buy one. Not us. We bought three. That’s right. Three. Here is how it happened.

Almost five years ago, we purchased our 2011 Ford Edge as a certified pre-owned vehicle with about 25,000 miles on it. In its day, the Edge was an almost top-of-the-line car, with leather interior, power seats, MyFordSync navigation and radio system, and lots of other options. We chose the Edge because it could be equipped to be towed flat on the ground behind our RV.

The Edge had 78,000 miles on it, but was fully functional and highly dependable. However, Jim and I are getting older, and we decided we wanted to buy a new(er) SUV that would come equipped with all the latest safety equipment, including adaptive cruise control, which allows you to follow the car ahead at a safe distance and even stops automatically to avoid a rear-end collision. We also decided that instead of buying a car that could be flat-towed, we would buy a vehicle that could be towed with its front wheels on a trailer dolly. The other requirement we had: The car we had to be capable of towing our small bass boat.

After carefully researching SUVs, I narrowed our choices to a half-dozen cars, all 2017 models. At the top of the list were the Toyota RAV4 and the Honda CRV-EX, both of which came with the desired safety equipment as standard. We leaned toward the RAV4, because they also came with luggage rails, whereas we would have to pay extra for the rails on the CRV.

On October 30, we spent about six hours in a local Toyota dealership, initially looking at and driving various models of the RAV4, which comes in 11 different trim packages with progressively more expensive price tags. We found the model we wanted, but could not come to terms with the dealer. We were ready to walk, when the sales manager offered a certified pre-owned 2017 with low mileage and all the safety features and options we wanted, at a price we could agree on. We bought it and said we would pick it up at 2 p.m. October 31.

I don’t know what is wrong with that dealership. The first day (trying to get our business), they fawned over us and even bought us lunch. The day we arrived to finish the paperwork, they did not even offer us a bottle of water. And they did not have the paperwork ready. It took four hours to finish signing the paperwork.

The next day, November 1, Jim and I started to learn how to use each of the car’s many features, by applying what we were reading in the owner’s manual hands-on to the car. When we got to the section on how to tow a trailer, we read an astonishing sentence: The RAV4 SE that we bought was incapable of towing! Every other RAV4 model could tow, but not the one we bought. (The disqualification had something to do with the SE’s suspension system.)
The next day we headed back to the dealership.

In Florida, there is no cooling-off period for car buyers. Technically, Toyota did not have to give us back our Edge. But, we believed that to provide a positive customer experience, the dealer would accommodate us. After all, we had told everyone we were working with that we needed to be able to tow our small bass boat and they assured us we could. We were misled, although I do not think it was deliberate on their part. I believe it was sheer ignorance because Toyota hides that information quite well.

To our astonishment, the dealer said it could not give us back our car! They had no other car that met our budget and needs, so after several hours of haggling, I said, “Just sell our car back to us, work the numbers, and make us whole!” A person, who we assumed was the general manager (he was not) finally said he would that. However, when (after another hour), a sales manager presented the paperwork, it was going to cost us $5,000 to get our old car back! You don’t have to be very imaginative to know how we reacted to that! Disgusted, we told them we would rather spend $5,000 on an attorney. We left.

We drove home in our unwanted 2017 RAV4. The next morning I wrote letters to two top Toyota executives. I also found the general manager’s e-mail address on the dealership’s team page and e-mailed him a copy of the complaint letter, which pointed fingers at Toyota for inadequate consumer information and the dealership for a terrible customer experience. I asked to be made whole.
Thirty minutes after I e-mailed the GM, we got a phone call from the sales manager, asking us to return so that we could get all of our money and our old car back. We gave them adequate time to prepare all the paperwork, but would you believe that we were still made to wait about four hours to complete the transaction? In the end, we “bought” our second card in four days, the second car being our old one, the Ford Edge.

We were still determined to buy another, safer, car, and decided to test drive some other models. One of those was the Nissan Rogue SL. We found a helpful sales agent, who told us that in the middle of the 2017 model year, the Rogue SL with the platinum trim package (much nicer than the RAV4’s), offered all of the safety features we wanted, plus options we desired. A test drive, some civilized negotiating, and another test drive convinced us that the Rogue was the car we wanted to buy. It was car No. 3. 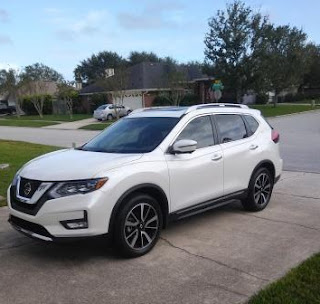 Three cars in less than one week. I really don't recommend doing this, especially the way we got it done. But if you are in the market for a new car, you might learn something from our car-buying experience:


We are pleased with our purchase, and are looking forward to towing our new car on its dolly behind our little RV “Thor”. In fact, we are going to do that next week.