What the sea giveth, it taketh away

Catch and release is a good policy, if you are not a fish eater, or if the fish you catch are protected. But the catch and release that we experienced today...well, that's a different story.

Before I tell you what happened, let me tell you where we are--Gamble Rogers State Park in Flagler Beach, Fla. This state park is rather unique: a section sits directly on the beach, with another (larger) section on the intracoastal waterway. Getting an RV spot on the beach is all but impossible. It is even hard to snatch one on the intracoastal, but we managed to get three consecutive days. Our plan was to fish from our kayaks one day and to surf fish another day.

The weather did not cooperate. We got here Sunday. The ocean was an angry dark green of crashing waves. The intracoastal likewise was rough. It was windy, hot, and overcast and rainy Sunday and Monday. But the weatherman promised that Tuesday afternoon would be sunny and pleasant. It was.

So today we headed out to fish--not in our kayaks, nor in the state park. Yesterday we drove around Flagler and found a wonderful park with fishing off a long walkway along mangroves, leading to the intracoastal. We also found more convenient areas to surf fish along highway A1A. 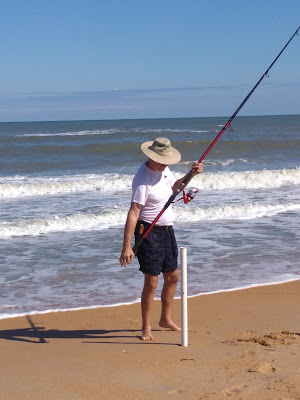 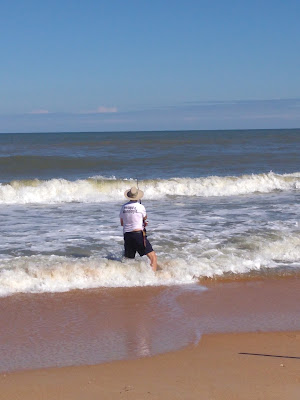 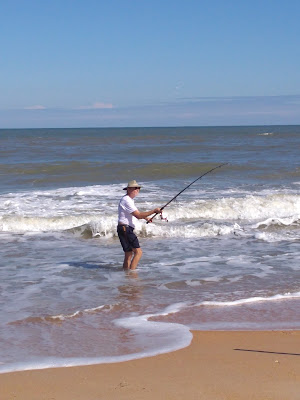 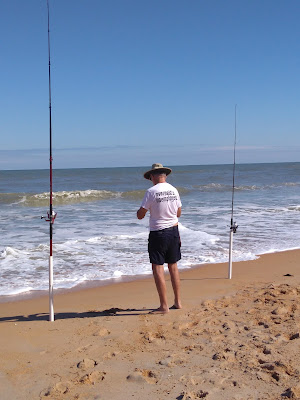 So, after consulting the tide charts (for best fishing times), we dipped our lines in the intracoastal and caught five fish! Unfortunately, they were all teeny-tiny catfish, too small to keep. But we did catch five!

After lunch (at a made-from-scratch vegetarian cafe we discovered), we set up our surf-fishing gear on the beach a couple miles from the state park. Jim promptly caught two small(er) white fish. He decided they were too small to keep, and he released them. (Mistake. They were OK to keep.) We decided to keep anything else we caught, so our bucket soon became home to two more fish--one Jim caught, one I caught.

I went up to the car for something. When I returned, Jim was laughing. "It's either laugh or cry," he said. It turns out that while he was tending his line, the bucket holding our two fish got caught in the surf. It turned over and the two fish that were going to be part of our dinner got a reprieve.

It was a wonderful day, and we quickly caught two more fish. In they went into the blue bucket. A while later, Jim said we should freshen the water in the bucket. We did, but he left the bucket too close to the surf--again. And again our dinner swam away.

What the sea giveth, it taketh away.

Despite our inadvertent catch and release and the soaking each of us took when we fell into the surf as we cast our lines (incidentally, we were not wearing swim suits), we had a great time.

The leftovers we had for dinner were good, too.