We bought Thor (yes, we named our Thor Axis, "Thor") a month ago, but we had not yet had the opportunity to use it because of our recent hurricane), until now. We were able to snarf a three-day stay at one of our state parks Torreya State Park, which is located about 30 miles west of Tallahassee. (It is surprisingly difficult to get into Florida's state parks. We like them, though, because as senior Florida citizens, we get a 50% discount on camping.) 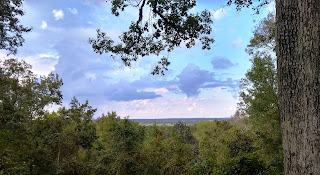 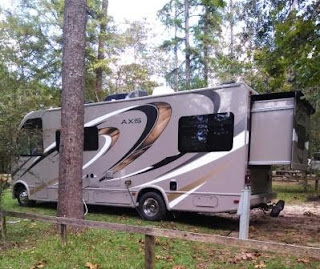 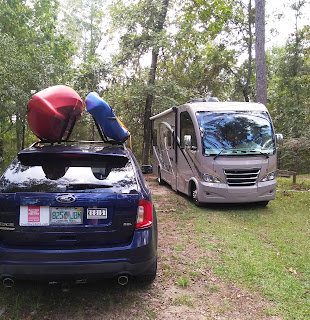 This park is rather unique: It boasts high bluffs that overlook the Apalachicola River. According to the park's description, there is supposed to be a small boat access to the river, where we should be able to fish. We cannot affirm this description, because although we put into our campsite before 3 p.m. today, we have yet to see a ranger, who should be able to give us directions to the boat ramp. We have found that rangers seem to come and go; there don't seem to be any set hours when rangers are available. Hopefully we will get information tomorrow.

Let me explain that Junior was a 40-foot behemoth of a motorhome, which provided us with living space equivalent to a New York apartment, plus a huge amount of "basement" storage. It took us more than a week to sort through all of the stuff we had stored in Junior. It was like downsizing from a 2,000 square foot house to a one-bedroom apartment.

Deciding what had to "go" and what could "stay" was difficult. Finding places to stow the stuff we decided we absolutely had to have was, to say the least, challenging.

But, we did it. And today/tonight were the first tests to our decision to downsize.

On the whole, I would say we made the right decision. Yes, it is much more crowded. It will get some getting used to the tiny kitchen area and even the tinier 6 cubic foot refrigerator. The fridge works well, but it is small. I suspect I will rely on cooking and freezing food in advance of any planned trip in order to minimize cooking. (Of course, that presents another challenge, since the freezer is also miniscule!)

The bathroom is also very small. We will try the shower tonight, since it is raining outside and we don't want to walk down to the shower house. (This campground has electricity and water, but no sewer, so it will be navy showers tonight.) Its worst feature, however, is the toilet. It sits so high that your feet virtually dangle when you sit on the pot! Jim put a footrest in front of the toilet. It think it will work out OK.

Jim misses driving his big rig. He says that driving this 27-foot motor coach is like driving a truck. That makes sense, since it is a truck. This RUV (recreational utility vehicle) has an F450 engine (gas). It doesn't have the pep that Junior had. It also does not have the luxuries that Junior (a 2005 Country Coach) had. For example, Junior's seats had power controls; these seats are manual. The seats are also not as comfortable--at least mine isn't. I need a footrest to sit comfortably.

We also noticed that although the seats are supposed to swivel, it is virtually impossible to turn the driver's seat all the way around. The steering wheel gets in the way of the swivel. Whoever designed the cabin certainly did not try to use the design.

Oh...I have to tell you about the one misadventure we had today. No, it did not have anything to do with electrical problems, which were common in Junior. It has to do with getting locked out.

Yep. As we were getting set up, somehow I (it was probably me) inadvertently pushed the doorlock as I was opening the door. The deadbolt also was opened, and I could not close the door. Jim discovered that the deadbolt was tripped. He undid it then closed the door.

Ahhh...the door locked. And of course, the keys were inside. Jim finally managed to pick the lock and we got it. The lesson we learned: Keep the extra set of keys in the car. And always use the deadbolt. It was pretty scary finding out how easy it is to pick the lock.