August 14, 2015—What a way to end a vacation—a vacation of more than four weeks.

We are in paradise, a spot of leisurely heaven located on the Forgotten Coast of Florida. The Forgotten Coast is just that: few tourists, few residents. Lots of coast, water, sun, fun. It is in the panhandle of Florida, away from the hustle and bustle of the big tourist traps. 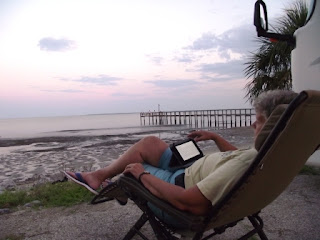 We found this RV park through a blog. Called HoHum RV Park, it is, well, ho-hum. Its rules say it is only for adults—no kids allowed. It has no amenities to speak of—no pool table, no swimming pool, no clubhouse. What it has is the Gulf of Mexico, free cable TV (with a comprehensive list of channels, none of that basic stuff), and free excellent wifi. It’s the best wifi we have experienced in any RV park. 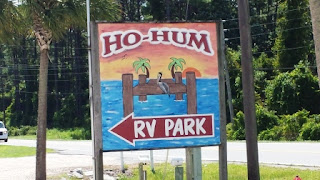 All of the sites in the park have a view of the gulf, but ours is parked front-window-facing the water. I am not one to sit outside, but last night that is what we did, until nightfall. After dinner Jim went out again and stayed outside until a storm threatened. He was looking for meteors. He also enjoyed actually seeing the Milky Way, which is not visible in the light-contaminated skies of Jacksonville.
At one point last night, he came in and showed me his tablet. He called up the weather map, curious to know how far south/southwest lightening strikes were occurring. The map showed they were all the way down by Tampa! Remarkable that we could see the light up here in the Panhandle. 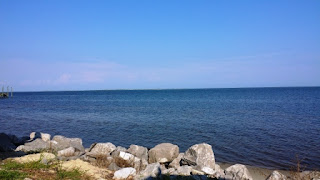 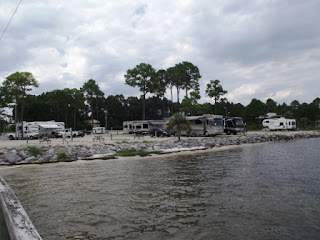 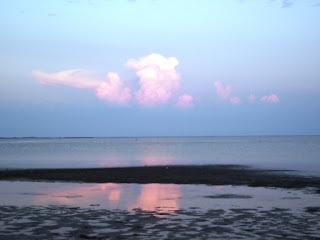 Later, around 2 a.m., Jim came in and asked if I was still awake. He beckoned me to the front of the RV, to look out at the threatening rain storm. The wind was picking up; slightly white-capped waves lapped the rocks below our motorhome. Then the sky opened up with sheet lightening. Spectacular. Finally, rain pelted our fiberglass box. We were cozy as the rain came down.

We are here to fish and to relax. Fishing (as usual) has not been good. But I don’t care. If I catch anything, I will post a picture. But no one has been catching. It doesn’t matter. It is just nice to sit back and relax.

That’s exactly what I plan to do right now.