Mr. Fixit does it again: Let there be shade!

August 12, 2015—Sunshine is delightful. It caresses your skin, makes you feel warm inside. Especially when the temperature hits the 90+ mark and you are sitting in a 40-foot long aluminum box called a motorhome.

We bought our motorhome more than two years ago “as is,” which meant that La Mesa (the dealer) did not repair anything that was not functioning, except for safety issues. Before we purchased Junior, however, we talked with the technician, who had gone over the coach from head to toe. He told Jim the things that needed to be fixed. (We now know he had not found everything, but that is par for the course when you buy a pre-owned motorhome.) Included in his list were two awnings—the little one over the entryway and big one over the kitchen slide. Both are products of Carefree of Colorado; both are automatic awnings with anemometers, which measure wind speed and communicate with the awnings electronic boards. When the wind gets too gusty, the awnings are supposed to fold up automatically. 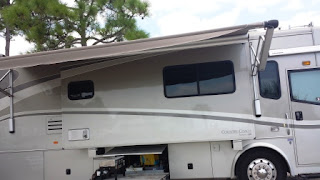 Nice feature, if it works.

The technician had told us that neither of the automatic awning worked: The electronic board in the small awning needed to be replaced, but he said that the automatic feature of the big awning could be by-passed and the awning would work manually.

The awnings have not been a priority issue with Jim, but this week he finally had the opportunity to look at them. The technician was probably correct about the little awning. He was right about the big awning. Jim found wires that were not connected. When he connected them, voila! We have awning!
Mr. Fixit does it again.

The awning will help reduce the load on our air conditioner, and we will enjoy our couple of days at the HoHum RV Park in Carrabelle, Fl., sitting in the shade and looking at the Gulf of Mexico, when we are not fishing.