Will It Never End?

Feb. 19, 2014—The never-ending sage of our electrical problems continue.

Ever since we purchased this motorhome, we have had intermittent electrical problems. Last trip out (down to the Keys), Jim thought it was the electrical cord. Then (just before spending $150 for a new cord), he found the real cause: bad brushes in the reel that winds up and stores the cord.
He disconnected everything; temporarily fixed the problem; and determined he would replace the brushes (some copper doohickeys) when we got home.

He did, last week.

It took hours. The worst part was putting everything back together, because he needed to use steel rivets. Very hard to use. (Steel is hard!) 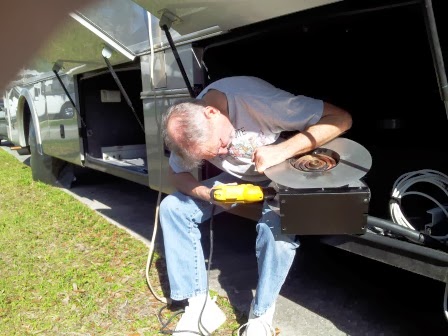 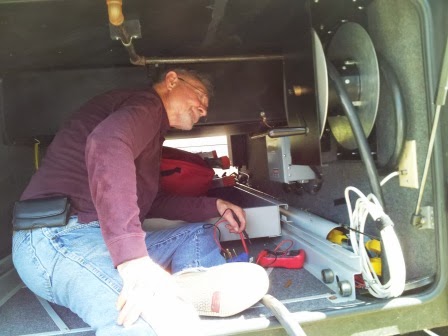 He thought everything was OK, but then suddenly we had a problem with the inverter, a device that allows you to get 110 electrical power in the motorhome when using batteries or on the generator. The inverter lit up like a Christmas tree; it did not show any charging.

Jim figured that would sort itself out once we were plugged in at an RV park.

In fact, really wrong. When we got to Vero Beach tonight he plugged in the cord and puff! (Literally.) Everything shorted out. And we still had a Christmas tree for an inverter. No power anywhere.
After testing everything, he finally decided that he would take apart all of his work, disassemble the entire reel, and attach the cord directly to the motorhome (instead of going through the connection in the reel).

Finally. We have power. Even the inverter is working (at least for now). I’m not 100% certain that the inverter doesn’t have an intermittent problem, but we won’t know until our next trip or at least until we try to use it without shore power. (Jim thinks it just needed to reset itself. I hope he’s right.)
Don’t get me wrong. We like our motorhome. It is luxurious. It is large. It is comfortable. But it is a pain the you-know-what. Luckily, my husband can fix almost anything.

We still have some things to fix that we knew about when we purchased this home-on=wheels—like the automatic awning.

And we have some updating to do. We purchased a very nice tall kitchen spigot with a pull-out sprayer. He may have time to install it while we are here. We also bought a bidet to put on the toilet. Those are little projects, which should be easily accomplished.

Should be. Easy to say. We’ll see if they are.

Later today are off to a Navy Seals museum in Fort Pierce. Tomorrow we attend our fishing clinic. And the rest of the week we plan to catch fish.