I used to take the train to work, when I worked in Chicago and lived in Wilmette, a northern suburb. I loved the no-nonsense commute. I would also occasionally take the El into downtown Chicago. That required being a little more adventuresome, since it required transferring trains, but I learned to do it, and I discovered that I didn't have to put up with the cost and trouble of finding parking in the city.

When Jim suggested taking MARTA (which I think stands for Metropolitan Atlanta Regional Transportation Authority), I was hesitant: We didn't know how to use the system. However, since we learned to do it in Washington, D.C., we figured we could do it in Atlanta.

The Rally is located in Hampton, Ga., a southside suburb about 20 from downtown. The closest MARTA station is at the airport, but we opted to go another couple of miles to a town called College Place. There we found free parking (and luckily a parking spot in the crowded lot!). As we were trying to figure out how to buy tickets, a lady came up to us and explained the whole process. I don't think we was with MARTA, but even if she was, it was a friendly and helpful gesture. We bought two round-trip tickets for $5 each. We also had to purchase a card for $1 each. The woman also told us that CNN and Coca Cola were within walking distance of each other. (She was right.)

As a side note: The RV Rally sponsors several area tours, including one that takes in CNN headquarters and the World of Coca Cola, which is next door to the Georgia Aquarium. The cost of the tour was close to $70 a person. Jim and I decided to go on our own. Our cost: $24 each for the combo tour tickets ($48), plus the cost of MARTA transportation--$12. We spent half as much as the cost of the bus tour.

We had no problem with the train, which dropped us virtually at the doorstep of CNN. We only had to wait a few minutes for a tour. In addition to us, there was a father and son, so this was a pretty private tour.

Being on the tour let me fulfill a lifelong dream: to read the news on air! Well, sort of. CNN has a mock-up studio as a first stop on the tour. After the guide explained how the teleprompters worked, as well as some other technical details of putting on the news, he invited one of us to try reading the news. It was my chance. Unfortunately, it didn't occur to my husband to take a picture(: He said I looked nice on TV, though.


The CNN tour was really very interesting. If I were young, I think I would like to work in broadcasting. Broadcasting, though, is a young person's job, since its constant deadlines are very trying.

After CNN we trekked across Centennial Park to the World of Coca Cola. It, too, was interesting, despite its being pure marketing. It was fun to sit through the 4D movie as well as to watch a collage of international commercials. The best part, however, was being able to taste more than 60 coke-brand flavors from throughout the world. 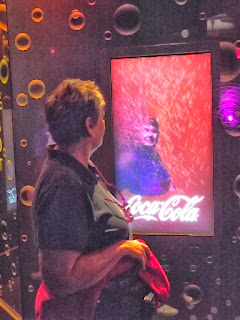 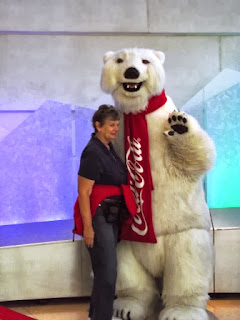 Many of the flavors were similar to ones we have here; some, however, were absolutely horrible.

When I starting tasting, I filled my plastic cup with about one or two ounces of each soda. It didn't take long for me to reduce the taste test for a lot less. You figure it out: one ounce each of 60 flavors is almost two quarts! We passed on tasting flavors available only in the United States. (Been there, done that.)

We hadn't eaten anything all day, so after the Coke tour, despite being filled up with soda, we were going to look for a place to eat. Jim wanted to go to Atlanta Underground; I have never been there, but several people who know the area told us to be "careful" of that area of the city. We stopped to ask directions from a police office. His advice? Don't go there. He said that it wasn't like it was 20 years ago, when Jim had been there. Now it was unsavory and mostly only flea-market stalls, with no good restaurants. We decided to pass.

The police officer recommending a hike up to the Varsity, a hot-dog/hamburger restaurant near Georgia Tech. It was quite a hike for foot-weary trekkers, but we made it. Jim said the Varsity is often shown on football games. I never heard of it. No matter; we didn't eat there. They did not have gluten-free buns, and eating a hot dog without a bun wasn't appealing. We decided to head home.

By this time, my feet were really aching. I looked around and mused, "I think there must be a MARTA stop near here." As I pulled out my smart phone to try to find out, Jim stopped a passer-by, who pointed to the MARTA station a half block away. Yea! We didn't have to walk back downtown.

Lunch? Well, it turned into dinner. When we got off MARTA at our station, we caught a whiff of barbecue. As we drove off, we found the restaurant and sated our appetite. It was good barbecue.

Tomorrow the Rally actually starts. We'll be going to seminars and visiting venders. Should be fun. What is not so much fun is rationing water and electricity, since we are dry-camping. More about that later.