In some ways, Charleston reminded me of New Orleans, with its grand old homes, riverfront views, narrow streets, its history, and its traffic. Yes, traffic. For a city that isn’t really that big, Charleston has a real traffic problem.

Yesterday, while Jim was trying to solve another electrical problem (it turned out to be the RV park’s problem, not ours), I went into Charleston on my own. The day before, we had driven into the historic downtown area and gathered brochures at the Visitors Center, where we discovered that the city offers three free trolley car rides to tourists (as well as to residents). I intended to park in one of the public lots somewhere along one of the main streets (Meeting St. or King St.) and catch a trolley for an unguided tour.

I drove around for at least 30 minutes (maybe longer), looking for a place to park. Every lot was full. My dilemma reminded me of the last time I had gone into New Orleans before moving back to Indiana: I had wanted to take some final pictures, and drove into the city. Unfortunately, I could not find a parking place, so I gave up and went back home. I never did take any pictures of landmarks in New Orleans.

I didn’t give up so easily yesterday. Instead, I drove back to the Visitors Center and parked there. I caught the Green Line Trolley and rode it around until it arrived at Market St. I wandered the four blocks of open-air market buildings, which have stood there since 1807, bought some excellent pralines for dessert, and then re-caught the trolley and headed home.

The old mansions in Charleston are quaint and beautiful. We noticed that many of the mansions face inward. We later learned that they were built with their front porches either facing west or south to catch the best sun as well as the sea breezes.

Jim and I are not “into” mansions and plantations, so we did not take a city tour. Instead, we took a Gullah Geechee Culture Tour. 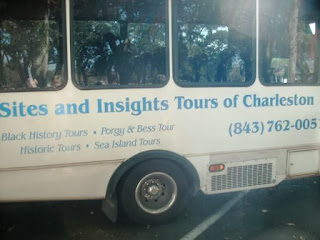 Gullah (also known as Geechee) is a culture and a language spoken by the slaves who were brought to the area from Africa. This invented language is a hodgepodge of English and African languages. It is still spoken by some Gullah peoples who live on the barrier islands in South Carolina and Georgia, but it is a dying language and culture.

Our tour guide took us around the city and two of the barrier islands and explained slavery and the Gullah culture in Charleston. It was a very informative two and a half hours.

After the tour finished, we found a Gullah restaurant the guide recommended. I had a Gullah specialty of rice, sausage, chicken, and shrimp. I would liken it to jambalaya, although the spices were different and it was not tomato-based. Jim had a seafood bisque with Gullah red rice (a spicy rice; Gullahs eat rice with all their meals). The lunch was typical low-country and excellent.

With lunch under our belts, we found Patriot’s Point, a park and sports complex area that is home to the USS Yorktown (a WWII aircraft carrier). We also found a memorial to South Carolinian submariners--a replica of a submarine with the sail (conning tower) and the rudder from two different boats.

Charleston has a lot of museums and is a repository of history. It is where the Civil War began, with the attack on Fort Sumter. If I were to come back, I think I would want to visit some of these museums. But for now, we passed on them.

Tomorrow we head on home.

It has been a good trip.