October 22, 2013, Augusta, Ga.--I’ve written Augusta, Ga., as my dateline, but in reality we are across the Savannah River in a small town called Beech Island, S.C. We found this RV park through Passport America, a membership group that gets us a 50% discount on RV park stays. I have to tell you, this has been the friendliest stay we’ve ever had.

Usually when you pull into an RV park, the first thing you do is check in at the office, give your name and perhaps some other information, and pay up front.

This is a small park, developed on someone’s home site many years ago. The owner lives on site. He met us as we pulled up and guided us to a spot to park our rig. After we got settled in, we had a nice conversation. I actually brought up payment! It was only $20--for two nights. Mind you, this is for full hookups: electric, water, and sewer.

Jim asked our host what there was to do around here. (We are five miles from Augusta, Ga., across the river.) We also asked about a good South Carolina barbecue place. He said he’d check out a couple of things and get back to us.

A couple hours later, the host knocked on our door. He handed Jim a bag of pecans (complimentary; he also has black walnuts for the asking), as well as several brochures his wife downloaded. This was very helpful. And how thoughtful!

Our first destination was just down the road from our RV park. It was the Redcliffe Plantation State Historic Site. Unfortunately for us, the plantation house was not open for tours today. However, the park ranger gave us a very informative talk as she pointed out a number of artifacts housed in the visitor center. 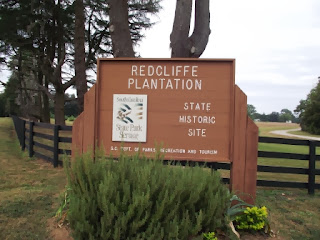 The Redcliffe Plantation was built by James Henry Hammond, who had been a senator and governor of South Carolina. He was not an admirable man. He was someone who micromanaged everyone around him--and abused them. However, he kept meticulous records, and from his written records, a great deal is known about how slaves lived, ate, and were treated. He actually had written a job description for his slave overseers!

Our next stop was lunch. We found downtown Augusta, and drove down Broad Street where most of the retail stores and restaurants seem to be located (aside from shopping centers, of course). We ate at a Mexican restaurant where we shared a large plate of delicious nachos.

Our next tourist destination was the Augusta Canal, the only industrial canal still in use in the United States. Built in 1845, it harnesses the water of the Savannah River and powered the mills, which were built as the canal was finished. The canal is clean. Augusta’s drinking water comes from it. Along its banks is a wildlife refuge area. People kayak and canoe and fish along the 82 mile canal. We took an informative hour-long boat tour down the canal. For the price of a boat ride, we also were able to browse through the canal’s museum.


After the boat tour, we drove around a bit, just taking in Augusta. I looked on our GPS for other attractions and found one that said “Creighton Living History Park.” Curious, we decided to check it out. It was located in North Augusta, S.C., just across the river from Augusta. 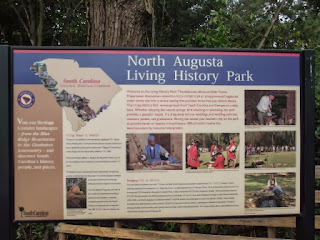 This park had a number of original buildings, which apparently are manned by re-enactors at specific times. I’m sure the park is used as a learning tool by teachers and enjoyed by students. The old buildings were not open, but the park was open to stroll through. It was charming and peaceful, with its bubbling spring that ran throughout the area.

It was a full day, and a nice one. Tomorrow we are off to Charleston. (We decided to postpone a visit to Raleigh until possibly November.)