The new adventures of The Reluctant Rover: Off Again

Sept. 15, 2013, Hobe Sound, Fla.--Earlier today, I posted a picture of Jim standing atop of our RV, using a pressure washer to remove the three months’ worth of dirt that had accumulated since our last trek, which was in February to Tampa. We had planned to travel during the summer, but a couple weeks before our trip was to begin (on May 23), Jim had the misfortune of falling off the roof of the RV. The eight broken ribs are mending, as are his clavicle, scapula, hand, and foot. He continues his physical therapy, and the doctor has given him the OK to resume normal activities. 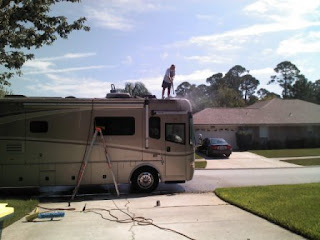 I did not want “normal activities” to include going up on the roof. But men—especially my man— are stubborn.

All the while he was calmly pressure-cleaning the roof, I not-so-calmly watched from a chair just inside of the garage. Each time he stepped over a hose or leaned down to pick up some debris, my blood pressure skyrocketed, as I nearly jumped out of my seat, holding my tongue to yell “Be careful!”

It took about two hours to clean the roof—a long two hours. This was on Friday.
It took us another couple of hours to pressure wash the rest of the RV, in preparation for a trip to the West Palm Beach and Orlando areas.

The real story of this trip, however, began yesterday (Saturday) morning.

We had parked our RV in front of the house so that we could pack up and get an early start. It didn’t take too long to pack up the food and clothes. The final thing to put on board was (you guessed it!), the cats.

Xena, our black cat, has been very accommodating lately. Usually she is the only who runs away and hides under a bed, refusing to come out. We usually have to chase her out with a broom stick. Not this time. She walked into the kitchen from our bedroom, where she has claimed our bed as her own, and plucked her up and carried her into the motorhome. (She did momentarily escape the next time Jim opened the door, but she allowed herself to be captured easily.)

Charlie? Well, as you know, he is our scaredy cat. He is the one who hid so completely in a cubby hole in our first RV (“Baby”), that we thought we had left him in Yuma, Arizona. Charlie seems to have a nose for intuiting that we are going to travel, for when it came time for us to transport him into the RV, he was nowhere to be found.

I had locked the cat door to the backyard, so I don’t think he escaped outside. But he must have found a really good hiding place in the house, because Jim and I looked for 45 minutes, to no avail. He was nowhere to be found. (So much for our early start!)

We finally decided he would have to get along on his own. (Cats can do this.) We left him with a clean litter box, access to the outdoors, a full water bottle, and a full bowl of food. We also left all the doors to closets and the garage open a bit, in case he was hiding.

We didn’t like leaving him, but we had no choice. I image he will be especially grateful to see us when we return Thursday.