September 16, 2013, Hobe Sound, Fla.—When Jim was in the travel business in the West Palm Beach area, he was active in Bon Vivants, a business-social club for travel industry personnel. Several times a year, the group traveled to various sites on mini-vacations. Occasionally a trip was a mystery to everyone except the person who arranged it. Anyone who wanted to take part had to pay up and have faith in the coordinator. 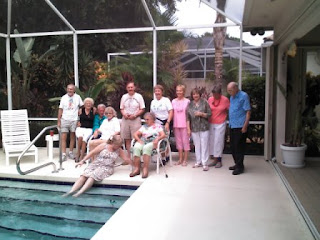 Twenty-five years ago, Jim arranged a mystery trek to his favorite place: Jamaica. Everyone who went on the trip was having a great time—until Hurricane Gilbert threatened the island.
According to members of the group (who reunited this weekend at a member’s home in Palm Beach Gardens), no one, including the hotel personnel, was aware that a hurricane was pending.

(Remember: This was 25 years ago. The sophisticated hurricane alert systems we are accustomed to today were not yet invented.) One of the people was listening to an old transistor radio she had taken on the trip and heard a warning. She rushed up to the hotel, told the staff of the impending danger, and then everyone went into action.

Everyone pitched in, according to Jim. They threw chaise lounges and tables into the swimming pool, hauled up buckets of water to their rooms (so they could flush the toilets), and began to double up sleeping accommodations. (The upper floors of the hotel, where some were assigned, were too dangerous in the high winds.)

Gilbert was no ordinary hurricane. It was a category 5—the worst label a storm can get. (Hurricane Katrina, which hit New Orleans in 2005 was a Cat 5.) Jim recalls watching the storm whip the palm trees so severely that the fronds lost their chlorophyll and turned white. He said he witnessed a sheet metal roof being torn off a building and hoped no one was in its path. The noise from the storm was tremendous. Jim slept in the bathtub, a relatively safe place to be when the storm hit.

It was a scary time, but some people made a party of it. A group of young travelers (not in Jim’s group) had a huge “ganja” party. The smoke wafted through the walls into the adjoining hotel rooms. Others played cards or board games. A lot of people sampled the local rum.

After the hurricane passed, the group again pitched in to help the limited hotel staff feed everyone who was there. Guests in this hotel were lucky. Their food wasn’t fancy, but at least they were able to eat some hot meals.

Gilbert extended the group’s stay by four days. When they were finally able to go home, they were dirty, sweaty, and thankful. They were also surprised when the hotel tried to bill them for the extra days they spent there—despite all the help they contributed! (The hotel rescinded the billing.) Their ordeal made the front pages of the Palm Beach Post. This year’s reunion won’t make the headlines, but a newspaper covered the party and took pictures.

The reunion of the Gilbert Survivors was a huge success. The numbers of those survivors are dwindling, but everyone said they wanted to have another reunion next year.