September 21, 2013, Jacksonville—Who says you have to leave home to rove? I was a not-so-reluctant rover today as we explored downtown Jacksonville. 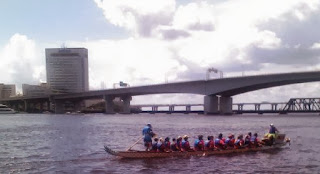 The city hosted two different events today. One we had never seen before—dragon boat racing. According to Wikipedia:

" A dragon boat (also dragonboat) is a human-powered watercraft made in the Pearl River Delta region of China's southern Guangdong Province out of teak wood to various designs and sizes. In other parts of China different woods are used to build these traditional watercraft. It is one of a family of Traditional Paddled Long Boats found throughout Asia, Africa, and the Pacific Islands. Dragon boats are the basis of the team paddling sport of dragon boat racing an amateur water sport which has its roots in an ancient folk ritual of contending villagers held over the past 2000 years throughout southern China. While 'competition' has taken place annually for more than 20 centuries as part of religious ceremonies and folk customs, dragon boat racing has emerged in modern times as an international sport, beginning in Hong Kong in 1976..."

This year was the first dragon boat festival in Jacksonville, held to support the fight against breast cancer. We decided to see what it was all about. We expected races all day. However, there were three heats. We got to the river side in time for the second heat, where we saw the long boats manned by teams of 20, who paddle to the beat of a drummer. It reminded me of Viking warships seen in movies. Everyone seemed to be having a good time, even though they were paddling against the current.

After we watched the heat, we headed over to the Fall Home Show. I think we’ve only missed one or two of these semi-annual events (spring and fall). It’s fun just to walk around and get ideas on home improvements. We were tempted to buy some of the products, but we didn’t. (Whew!)

By then it was mid-afternoon. We headed home and hung out by our swim-spa. Ah, life in Florida!
Until next time (which we anticipate will be next week, when we head back to Orlando area).