Another small step toward traveling

Buying a used RV is like purchasing a previously owned house: You want to put your own personal touches on it. In our case, the "personal touches" mostly address rearranging the dining area and creating a desk/storage area in the interior. That came out very nicely--lots more storage and a place to put the printer, laptop, and external hard drive. We put the finishing touches on this amenity yesterday.

When we purchased Junior, we bought it "as is," except for items needing to be fixed that affected safety. One of the side-view mirrors (on the driver's side) was broken. The top half of the mirror was OK; the bottom half, which gave a wide-view of the rear, was missing. La Mesa, the RV dealer, said it would replace the mirror, since this was a safety issue.

We patiently waited. And waited. And waited for it to be sent. After a couple of months, Jim finally followed up and we received it. (Jim said he would put on the replacement, since it would be inconvenient to take Junior to the Orlando-area dealer for installation.) Alas! The mirror was chrome, not taupe. No way were we going to have a mash of mirror colors! 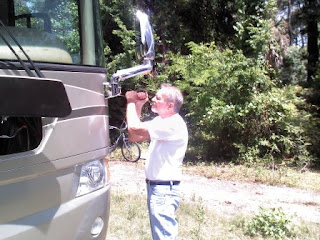 When we called the dealer, Jim said we would be happy to return the new mirror, or if they preferred they could replace the other mirror to match the new chrome mirror. They said they would replace the other side-view mirror, at their cost. That was a good thing, because a search for this type of replacement mirror found that they each cost about $750!

Yesterday was mirror-changing time. The change-out was easy...just unscrew, unplug, plug in, and screw in. We are back in the side-view mirror business!

The next thing Jim wants to do before we head out West again is to put up the solar panels that he had removed from Baby. He is designing a way to adjust the angle of the solar panels, to catch maximum rays when (and if) we do any dry camping. (Not high on my priority list.) The panels will help keep our house batteries charged.

Finally, we need to put up our new privacy curtain. For some mysterious reason, the previous owners removed the curtain track (and curtains) and put up window shades. Shades sound like a good option, until you realize that they do not offer 100% privacy, since there are gaps between the shades. So, we ordered new tracking and I made the drapes. We had to allow the flexible tracking to "relax" before attaching it around the windshield. I think it will be ready next week.

Our travel plans? Looks like we are going to go back to Yuma/Los Algodones, then head up to the northwest to visit national parks. It will likely be a long trip.