You knew it was going to happen--especially after our mishap on I4 last week. We bought a new(er) RV. For the time being, we are calling it Junior.

Junior is a 2005 Country Coach Inspire. Country Coach is a company that made high-end RVs. Unfortunately, it went out of the manufacturing business in, I believe 2010, due to mismanagement by a company that had bought out the founder. The founder, however, repurchased the name and all the intellectual property of the company and is back in business, providing service and parts. He intends to begin manufacturing again. 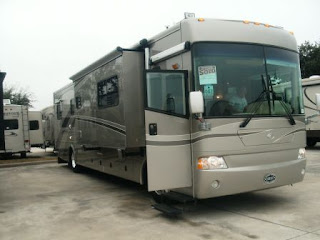 The motorhome we purchased is beautiful. It is 40 feet long (two feet more than Baby) and has three slides, which give it a lot of living space. It also has a lot more storage capacity. Like Baby, it has a washer/dryer, only this is a combo model, not a stacked unit. I prefer the stacked unit, but, that takes up a lot of space and adds more weight to the motorhome.

As you can see from the pictures, the cabinetry is cherry wood. The ceilings are higher, giving a feeling of spaciousness. The floors, we discovered, are a high-end vinyl planking, similar (but nicer quality) than the flooring Jim installed in Baby.


The bathroom is a split design. The walk-through area has a large vanity and a big shower with seat in it. It will be nice to be able to sit and shave my legs! This larger bathroom also gives up the opportunity to put the litter box in a more appropriate area than the living room.

The living room has a desk area, which I am finding not especially convenient, because of the seating. I am presently writing this with the laptop on my lap, sitting in the oversized recliner. (Why do they put such big recliners in motorhomes? Don’t the designers have a sense of perspective?)

The kitchen has more counter space than we had before. It also has Corian countertops. Nice. We also have a four-door refrigerator, much larger than the one in Baby. (More about the fridge later.)
A really nice feature is an upgrade the original owner purchased--an electrically operated footrest for the passenger seat. I like to ride with my feet elevated. This will make it easy!

The motorhome also has new tires, which is important, since tires (which we were going to have to buy for Baby) cost around $3,000.

Of course, this picture-perfect “home” isn’t quite perfect. We purchased it “as is”, which meant that the dealer only fixed safety issues. We went through it pretty closely, but we were still surprised.

The floor was one. Even the sales staff thought it was wood, not vinyl planking. The refrigerator was another surprise. The freezer worked, but the fridge didn’t. Our service technician thought it might be a computer board, and he was willing to swap it out with another from a similar refrigerator that was going to auction. When he looked at it, however, he discovered that a fuse was blown. A new fuse, and we should be back in business.

We also discovered that the LP gas detector didn’t work. Jim accidentally turned on a gas valve to the stove, and the motorhome filled up with gas, but the detector did not come on. (We’re fine.) The dealer is replacing the detector with a new one; it’s obviously a safety issue.

We talked with the service technician who assessed the motorhome’s needs. He said that the big awning (automatic, not manual) did not work. However, he told Jim how to fix it. Not such good news for a small awning over the door. It will have to be replaced. Fortunately, that awning is not critical.

You might be wondering about the cats and how they are adjusting to their new home. Well, yesterday when we introduced them to their new surroundings, they didn’t like it too much. They immediately searched for a hiding place. The only place they could find was the 8-foot wide closet in our bedroom (another nice feature). So, they hid in it for awhile. Charlie came out first; Xena finally followed.

Tonight, though, we wondered where Charlie was. Well, he found another hiding place, an opening under our bed. And he got stuck there! When the slide is open, there is no way to come out. Fortunately, we finally found him, removed one of the under-bed storage drawers, and let him out.

Oh, one more thing. We decided not to trade Baby. We are selling it on our own. I have to say, it looks impeccable, and once Jim gets the roof done and shines up the outside, we hope it will make someone else (an entry-level RVer) very happy. Know anyone who wants a good motorhome? It will be priced very reasonably.