March 4, 2012—Anyone who has traveled to Arizona and visited the Painted Desert has heard of (and probably visited) the Petrified Forest. That’s the only petrified forest I had ever heard of, so we were surprised when we discovered the Mississippi Petrified Forest outside of Jackson, Miss.
We’ve been taking scenic routes instead of interstate highways. As we pass from one state to another, we stop at the visitor’s center and glean it of information on the state’s attractions. Some we won’t see this trip; we catalog them. But others are on our way home. That’s how we found out about the Mississippi Petrified Forest. Although it is privately owned, it was not “commercial.” The admission charge was only $7 per person ($6 for us old farts), which gave us access to a six-block walking trail that showed off many examples of petrified wood, including giant sequoias as well as other trees, some of which are now extinct.
As we started our walk (we were the only visitors at the time), we were greeted by a small calico cat. Jim can’t pass by a friendly cat. He bent over to pet her, and she turned over onto her back for a good belly rub. That did it! She kept us company for our entire little trek. She’d be a pace behind us, then hop up onto the fence and walk for a while. At one point, as we looped around the lane, she lagged behind. Jim stopped and called to her. We wondered if she would follow the path or cut across. She took the shortcut to join us as we finished our walk. 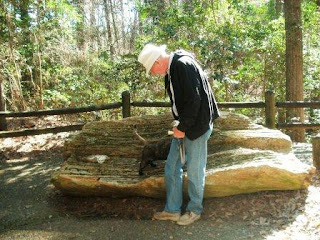 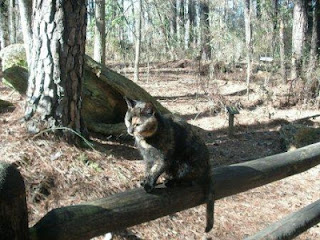 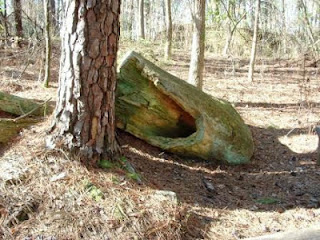 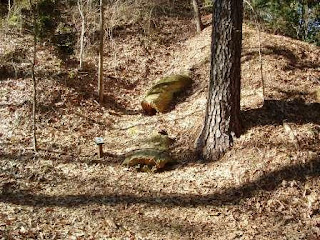 The petrified forest was really interesting, especially when we learned some of the history. This area was known as the bad lands for years. We saw a picture of it as it appeared in the 1960s; it truly was badlands—huge rocks sticking out of the ground. Nothing would grow on this land, which was formed when a raging river tore through the area and formed gullies and ravines.
But we didn’t see badlands. We walked through a forested area. The owners of the land allowed the land to reclaim itself, and within 40 years, most of the ravines have disappeared; tall trees have grown; and the area is serenely wooded. It is remarkable what nature can do when left alone.
We are now in Biloxi for a couple of days. We picked up literature on the local attractions. Stay tuned to find out what we discover on the Mississippi Gulf Coast.
Until next time,
Your Reluctant RoVer,
Linda
at March 05, 2012