March 1, 2012—Diamonds are a girl’s best friend, or so they say. Me? The only diamonds I have (and want) are those on my engagement and wedding rings. I’ve never been “into” jewelry. Nevertheless, the opportunity to dig for diamonds was too good to pass up.
Arkansas’ Crater of Diamonds State Park is dedicated to public diamond mining. The diamond-mining area is 37 1/2acres, which are plowed periodically to help bring the diamonds to the surface. The diamonds themselves were formed about 100 million years ago; they lie on the surface of an ancient volcanic crater.
Three colors of diamonds are found in the park: white, brown, and yellow, in that order. Along with diamonds rock hounds find semi-precious stones, such as lamproite, amethyst, banded agate, jasper, pendot, garnet, quartz, calcite, barite, and hematite.
The first diamonds were found by a local farmer who owned the land, which is near Mufreesboro, Ark. Although there were some commercial ventures to mine the gems, they were not profitable. The site became an Arkansas state park in 1972.
Driving to the park took about an hour down winding two-lane highways and through gorgeous scenery. (Every day more flowers appear.) We brought our own shovel and bucket, but we rented screens to sift the dirt.
There are three ways to find diamonds:
Jim opted for the wet sifting. I opted to walk up and down the plowed fields. I also sat on the ground and played in the dirt, breaking apart clumps to see if I could find anything. 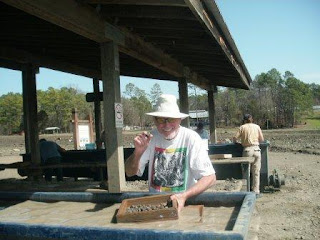 I didn’t. At least, not any diamonds. I found some pretty agate, but that’s not really what I wanted.
Diamond Jim didn’t find anything either, at least at first blush. The park allows you to take home up to five gallons of dirt. We took home the washings. We’ll spread them out to dry thoroughly and then try to identify the pebbles. 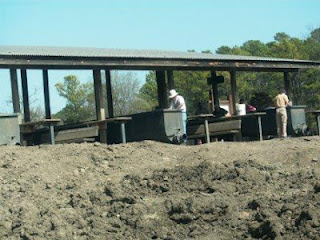 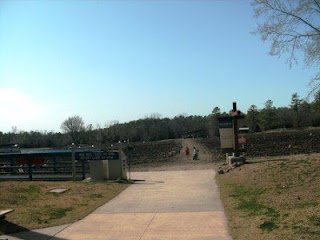 A man and woman who are veteran rock hounds were helping novices like us use the equipment and identify the stones. The lady especially was good at this; she did not espy anything worthwhile in our cache. (Although her hunt didn’t turn up anything worthwhile, in the years she has gone to the park, she has found 11 diamonds.)
It’s a lot of work, mining diamonds. We would do it again, though. It was a lot of fun. However, I think I’ll keep writing to earn extra cash. I wouldn’t count on a mining venture to pay off.
Until next time,
Your Reluctant RoVer,
Linda
at March 02, 2012