March 12, 2012—We are home again! Yea!
I started anticipating getting home as soon as we crossed over the Florida border. At the sight of the first sign saying “Jacksonville” my heart started to beat a little faster. It’s not that I’m in love with Florida or with Jacksonville. It’s just that it is currently home. And home is where I wanted to be. 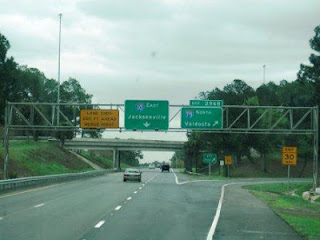 We spent two more nights traveling in Florida—the first (March 10) in Carrabelle, a Gulf Coast town, and the second (last night) in Green Cove Springs, about 30 miles southwest of here. (We did not have a place to park and store “Baby” so we stayed that in the RV park so we could find a safe storage place the next morning.)
Incidentally, most people lost only one hour’s sleep when they turned their clocks forward on Sunday morning. We lost two. Carrabelle is just over the time zone change (Central to Eastern time), so we lost one hour by changing time zones, and another because of daylight savings time. I’m still tired!)
I’m happy we’re home. Jim is not. He would rather be out on the road yet. I don’t think he has the “homing gene” in him. Instead, he has the “roaming gene.”
Some observations about our very lengthy trip:
I call this blog the Reluctant RoVer. Am I still reluctant? Yep, but not as much as before. This is still Jim's dream, not mine (can't say I have any!). I wouldn't be RVing if it weren't for him. I still see RVs as hotels on wheels. I really would not want to live in a tin can full time. And I don’t understand people who just go out and camp. What do they do? Why do they do it? I prefer to have the small luxuries my house provides me, which include space, my swim spa, more space… you get it.
Everywhere we go, though, we meet people who do this full-time. Jim would like to; I want a house. If we sell our house, I’m willing to go full-time only until we find a new place to live…but only until that time. So, I guess you can say I am still …
Your Reluctant RoVer,
Linda
at March 15, 2012