February 3, 2012—We arrived in the Yuma area on Sunday, and made our first visit to the dentist on Monday. When we were here last August, we saw a dentist, whose first name was Edgar. He was a young guy, seemed competent, but even then he carried on with an air of a short-timer. Apparently he was. He is no longer with the Gator Dental Group, where we received our care; he was fired. Apparently too many people complained about his work.
After Dr. Edgar had provided us with our crows, we each complained the bite wasn’t quite right. Jim, especially, had difficulty biting. Dr. Edgar had told us to come back in six months for adjustments In hindsight, we should have remained and had the work redone then. I think dental bites are like shoes: They either fit or they don’t. You don’t break them in. Oh, well, we learned a lesson.
When we arrived at the dental office, we had to wait a couple of hours to see the new dentist, “Dr. Oscar.” This young man took about an hour or so to make the necessary adjustments to my bite, which is now better than it has been for 50 years, so I am happy. Jim went in next. Unfortunately, Dr. Oscar could not correct the poor workmanship of Dr. Edgar, and Jim has had to have all of his crowns redone. The senior dentist of the practice, Dr. Miguel Fuentes,  one who has at least 20 years of experience, is doing the work, and we are confident that it will be done correctly this time. Jim should have his final crowns in place tomorrow, Saturday. (Mexican dentists work six days a week.)
Los Algodones, as I reported in August, is a medical-destination community for Americans and Canadians, most of whom are retired. Last summer, the streets were virtually empty. Now, and throughout the winter months the streets are literally packed shoulder-to-shoulder with Americans and Canadians.
Getting into Los Algodones is easy: You simply walk across the border. The Mexican government doesn’t care who you are or if you have a passport. They just want you to spend your money in town, and that becomes very easy to do. 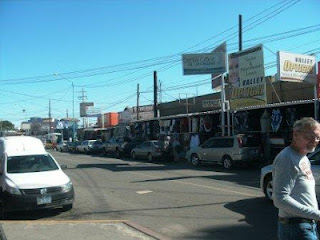 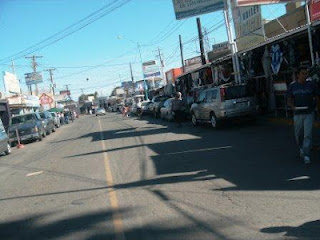 As soon as you access the main street in the town, street hawkers confront you, trying to get you to come into the various drug stores, dental offices, and optical shops. They hand you brochures that offer free exams. (Getting free dental exams is actually a good way to assess several different dentists to get their opinions and cost appraisals before making a decision on where to get dental care.) These hawkers will also escort you to the dental office and introduce you to the staff.
If you know where you are going (or don’t care), the next thing you notice are the street venders. Not only are there shops that feature every sort of trinket you can imagine (three-foot tall ceramic monkeys dressed in cowboy apparel seem to be very popular), there are also sidewalk venders who sell serapes and ponchos, wallets, purses, tee shirts, and jewelry, to name a few souvenir items. Buyer beware!
You can get some bargains in this town. Our dental work (guaranteed) cost about one-fourth of what we would have paid in Jacksonville. One optometry shop advertises single-lens glasses for $29, bifocals for $39, and progressive lenses for $49. (Jim may get an eye exam and new glasses tomorrow.) We haven’t shopped much yet (tomorrow we plan to browse), but as an example of bargains, last summer I bought a leather purse for $20. A comparable purse at home would be about $40. The other day I got a much-needed haircut for $6. (The quality of the haircut? Not any better or worse than the Supercuts I get for $18 at home.) And I bought a liter of vanilla for $3. (Have you bought vanilla at the grocery recently? A little bottle of extract, less than one ounce, is about $7, if I recall correctly.) Judging by how turistas were buying tequila and rum, I would guess liquor is a bargain, too.
Drugs are also inexpensive, and you can buy many of them, such as antibiotics, without a prescription. However, you have to be careful about what you buy. I learned the hard way.
I wanted to buy some generic Cipro. Last August I bought some for my mother and had no problem taking it across the border. This time, however, was another story.
We stood in a slow moving line several blocks long, waiting our turn for more than an hour to cross over to the United States. When I handed the border agent my passport and showed him my purchases, he said I could not take the Cipro into the United States! The FDA had banned it.
I was willing for him to toss it, but he couldn’t do that without filling out a lot of paperwork, which he said would take about 90 minutes to complete. He advised us to take it back to the drugstore and get a refund. When I bemoaned the long line, he gave us a pass to go to the head of the line when we returned.
The drugstore refunded the money, and the pass worked. The people ahead of weren’t even angry; they had seen us being sent away.
I said that getting into Mexico is easy. Leaving is hard—mainly because you have to wait in line for an interminable time. Last summer it was quick; not so, now. We waited in a line that snaked down a couple of blocks. The monotony of waiting was occasionally broken by a few gray-haired guys who had sampled some Margaritas while their wives had been shopping. Not so entertaining were the many, many beggars who intruded upon the line. You could see that these people (children included) were dirty and malnourished, and your heart went out to them. But…
As we were standing in line that first day, we saw something interesting: Pedicabs loaded with four to six people shortcut the line of cars exiting the country. Jim and I decided that the $5 per person cost to be whisked across the border up to the parking lot was worth the money. I don’t mind standing in line for 15 or 20 minutes, but more than an hour is way too much.
Until next time,
Your Reluctant RoVer,
Linda
Posted by Linda