An inexpensive repair, a late start, and a cold and snowy trip

February 17, 2012—In my last blog post, I reported that we were waiting for a mechanic to fix our compressed-air problem. I’m happy to report that he finally got to the park and found the cause of the problem: The governor on the compressor malfunctioned. He replaced the governor, and we were back in business. I’m glad we had purchased the Good Sam Emergency Road Service, which pays for the first hour of help. The cost to us? $50, and that included the cost of the new governor! That was a pleasant surprise.
Since we got off to a late start (2:30 p.m.), we drove until it got dark and dry-camped at Walmart in Alamogordo, home to White Sands Testing. The sands really are white! It was too late to go to the White Sands National Monument, so I only managed to take pictures of the sands from our moving motorhome. (After our experience at Imperial Dunes, I wasn’t too crazy about venturing into any more dune areas, regardless of their color!) 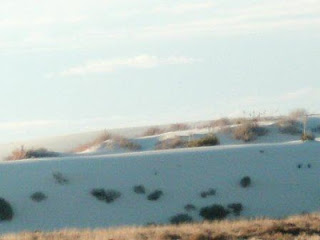 Alamogordo is home to an air force base, testing grounds, and the New Mexico Space Museum, which we visited this morning. The museum had all types of memorabilia, including the speed sleds used to test G-forces on the human anatomy. As a side note: HAM, the first chimp in space, is buried onsite. 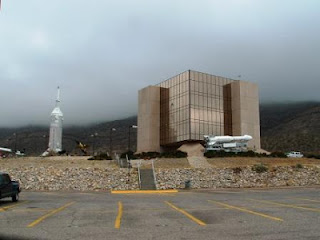 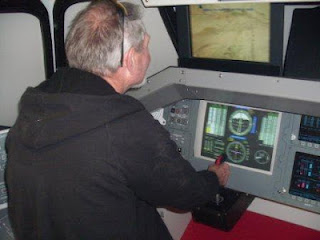 Our plan for today was not only to visit the Space Museum, but to travel a bit farther north and see one of the largest areas of petroglyphs in the United States, then to visit the Valley of Fire in an area known as Malpaís (translation: bad country). From there we would spend the night in an RV park in Ruidoso, which, we learned, is in ski country. The problem with our plan was that last night’s weather forecast predicted several inches of snow where we wanted to go. 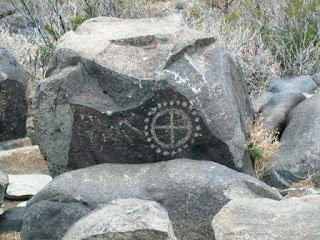 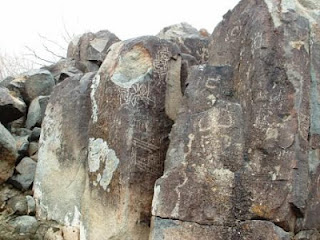 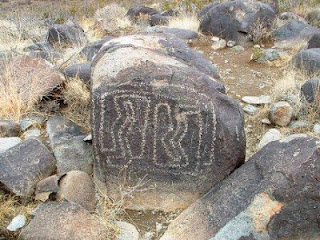 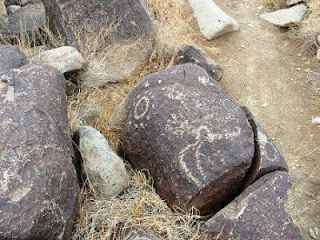 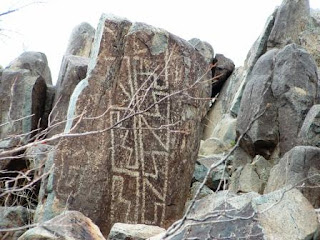 We are not prepared to drive in snow. We decided to watch the weather and proceed with caution. And that we did—watching the temperature drop and seeing snow in the distant mountains.
The Three Rivers Petroglyphs boasts more than 21,000 petroglyphs, created by a group of prehistoric Native Americans called the Jornada Mogollon. The pictures were made with stone tools by artists who removed the dark patina on the exterior of the rocks.
The literature provided by the Bureau of Land Management (BLM) said it is not known why there were so many petroglyphs created in this area, or what they actually meant. Jim and I decided to make up our own history: We believe that the drawings were made by students, who, having demonstrated some artistic ability using charcoal, were sent to the rocks to practice their etchings before doing them on the walls of caves.
That’s our story and we’re sticking to it! Whatever their reason for being, the petroglyphs really are amazing. They show animals, people, snakes, birds, and other objects. Going to this site was worth the drive.
The temperature continued to drop, little by little, and the skies looked cloudy, but we decided to press on.
Our next stop was an area called Malpaís, literally meaning “bad country.” This 125 square mile area is a lava flow that goes down 160 feet at the center. The black rock formed by the lava looks like burnt rock—hence the name, Valley of Fires. It is an extremely forbidding place. Information on the area says that a few prospectors and ranchers have attempted and failed to make a living in this area. It is easy to see why. It really does look like a burnt-out forest. 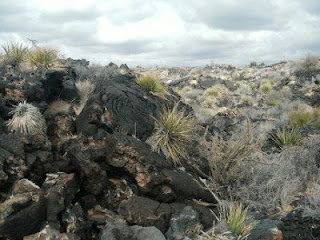 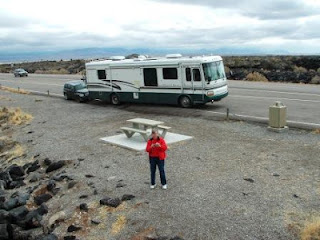 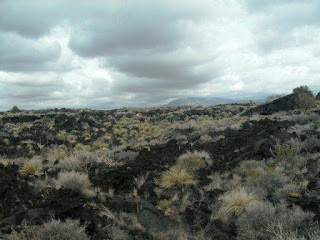 After a good lunch of cocina saborosa Mexicana (delicious Mexican food, as the restaurant boasted—and it was), we called the RV park in Ruidoso to find out if the roads were clear. We were assured the snow had stopped several hours earlier; the roads were clear.
Ruidoso, according to the BLM ranger at the petroglyph site, lies at a higher elevation. As the crow flies, it was only about five miles from the petroglyphs. We could not fly, however. We had to transverse a very windy highway around and up a mountain.
The countryside changed. Instead of arid desert, we found ourselves in snow-covered forested countryside. It is very beautiful. The RV park abuts a “river” (actually a small creek). Over the last couple of days, I’ve spoken with the owners several times. They told us they just moved here from Texas and took possession of the park two days ago. Nice people. I think there are only two or three people staying here right now. 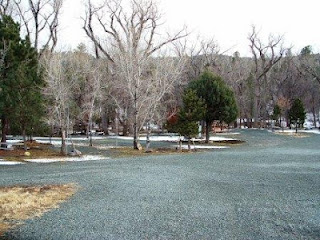 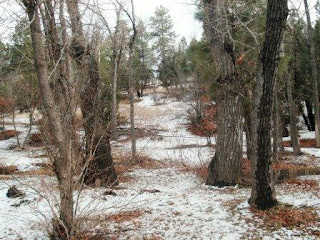 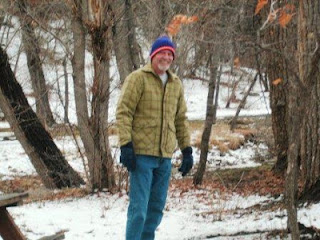 There is snow on the ground, and it is cold. It may also snow again tonight, so we may or may not be traveling down to Carlsbad Caverns tomorrow. Who cares? It is pretty here; we are warm; and we have plenty of food in the ‘frig.
The only thing we don’t have is cell-phone service or Internet access. Oh, well. We’ll live without those amenities for a day or two, and I’ll post this when we get back to “civilization.”
Until next time,
Your Reluctant RoVer,
Linda
at February 18, 2012