February 22, 2012—When I was about 10 or 11 years old, Davey Crockett (King of the Wild Frontier) was one of the top children’s TV programs. My brother John and I watched it religiously, and afterwards, in our play, we re-enacted the episodes. Yes, I admit, I was a tomboy, and as such, I had to have a coonskin cap. Johnny and I would put on those caps, take out of toy rifles, and set out to hunt Indians and trap bear. What fun! (Do kids do those things today? If they don’t they don’t know what they are missing.)
Today, we visited the Alamo, where Davey Crockett, Jim Bowie and 146 (or so) others sacrificed their lives in a battle in February 1836 against the Mexican leader Santa Ana. In their quest for independence, Texas volunteers captured the Alamo, one of five mission/forts in San Antonio area, from the Mexicans. Santa Ana was determined to recapture it and teach the Texans a lesson. He succeeded. No one survived the 13-day siege.
Although I lived in Texas for two years, I had never traveled the 90 miles or so from my house to San Antonio to see the Alamo. It had always been on my “to do” list. My friends told me, “The Alamo is nothing, but you’ll love the River Walk.” They were right.
What a disappointment the Alamo was! The section of the mission that survived the siege has been partially restored. Visitors can take photos of the outside of the building, but they are forbidden from taking any pictures inside the building! Another thing: Men are required to remove their hats. This is a big deal: Texans don’t remove their hats—ever! Not even in classrooms nor in restaurants. Jim forgot and was irked when an attendant reminded him.
The River Walk, the first in the nation to be created, was another story. My Texan friends were right: It was very nice. Lined with shops and overpriced restaurants the river winds throughout the city for a couple of miles. (The city is extending the walking trail.) As part of a tour package we purchased, we took a 30-minute narrated boat ride along the River Walk and learned the history of the various buildings and of the River Walk itself. 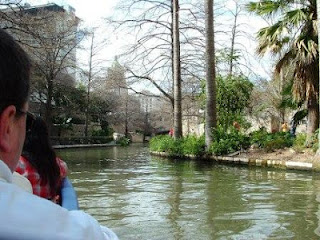 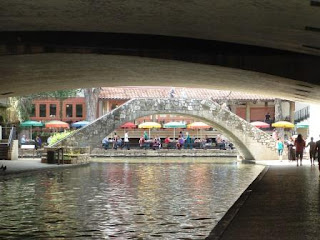 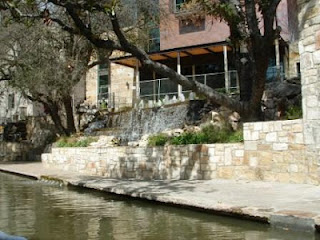 The tour package also included an IMAX movie on the fight for the Alamo, and a hop-on/hop off two-day tour of the city. We took the 60 minute narrated bus tour; tomorrow we are going back to visit some of the places on the tour, such as two of the remaining missions and a section of the city founded by Germans.
Speaking of Germans…over the years, a large number of Germans immigrated to Texas. The names of several towns bear witness to this—for example, Boerne and Fredericksburg. We passed through Boerne to reach our RV campsite, and yesterday we visited Fredericksburg.
We both loved Fredericksburg. It is a town of about 25,000 that has learned how to survive the influx of big box stores by capitalizing on its heritage. The downtown was filled with tourists who shopped in German-themed stores and ate in German-themed restaurants. This town was friendly, clean, and vibrant. It is located in the middle of the Texas Hill Country (absolutely gorgeous scenery). I could easily live there.
Fredericksburg is also home to the National Museum of the Pacific War, which we visited. It is a memorial to those who fought in the South Pacific, where my father fought. The museum comprises three locations: The first is in the Admiral Nimitz Museum, located in the hotel the Nimitz family owned and describes Admiral Nimitz’ life. (He was in charge of the Pacific naval theater.) The second location is in the Museum of the Pacific War. It is a typical museum, with interactive exhibits describing all facets of the Pacific war.
The third location lies a couple of blocks away from the other two. At this site, part of the Museum of the Pacific War, a guide takes visitors through a building that houses artifacts, including a real PT boat (the kind that John Kennedy commanded).
As a Navy veteran, Jim really enjoyed the Nimitz museums.
Me? I’m not “into” war museums very much. I enjoy natural things, such as the Sonora Caverns, which we visited the day before. We had time, so when we saw the signs for Sonora Caverns we decided to stop. These caves, privately owned and operated, are living caves, as opposed to Carlsbad Caverns, which are “dead.” The formations were much more beautiful and reminded me of the Squire Boone Caverns in southern Indiana. 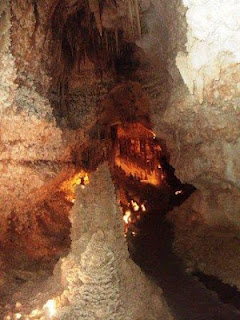 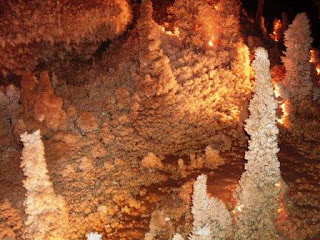 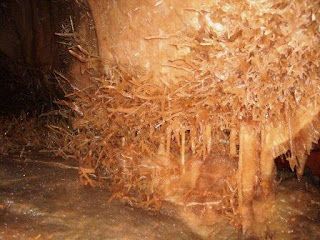 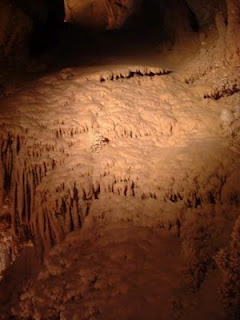 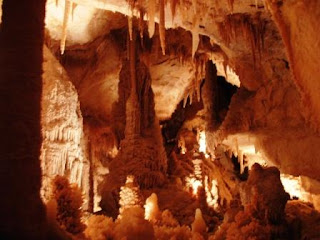 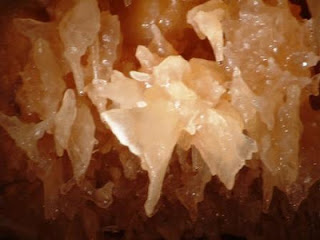 We’ve been busy! And we’re having a great time—so much that we decided to stay here a couple extra days. This RV park, part of our Thousand Trails membership, is on a lake (which, unfortunately has suffered from the prolonged Texas drought) and in a woods. Although we are disappointed in the lack of amenities (no cable, WIFI only in the club house, pool table and mini-golf course in less-than-pristine shape), it is located in the heart of the Hill Country, and that makes up for a lot.
Until next time,
Your Reluctant RoVer,
Linda
at February 23, 2012