January 23, 2012—I’ve never been to England, but I’ve seen the London Bridge…in Lake Havasu City, Ariz.
While we were at the RV Show yesterday, we were given a complimentary three-night stay at an RV resort on the Colorado River, which separates Arizona and California, about 20 miles west of Quartzsite. Jim called to see if we could get in this week (our only time here). It didn’t look promising, since we had not given any notice.
This morning, however, we decided we wanted to stay at least one night (and preferably more) somewhere with full hookups, so that we could dump tanks, fill up on water, and do our wash, which was rapidly accumulating. We found a place that advertised a modest $20 rate. Jim hooked up the sewer, dumped the tanks, and started filling the water tank. He then tried to plug into the electrical hookup. Surprise! This RV camp only had 110 outlets…no 30 or 50 amp plugs. We couldn't get any electricity.
Since we couldn’t hook up our electricity, we got our money back. Actually, we came out ahead, since we dumped the tanks and filled up on water. We headed back to our desert campsite.
As we were getting situated, I decided to call the Colorado River RV resort to see if our request for accommodations was confirmed. They were! So, here we are—back in civilization, fully hooked up, in a nice resort directly on the Colorado River, which is purported to the Riviera of Arizona.
Our original intent today was to visit Lake Havasu City, about 50 miles north of Quartzsite. The trip took a little longer from this RV park, but we decided we really wanted to see the historic London Bridge, which was dismantled and rebuilt in Lake Havasu City in the late 1960s. The bridge, along with a replica of an old English village, opened to the public in 1971. The city’s builder, Robert P. McCulloch, bought the bridge for $2.5 million. It cost an additional $7 million to reconstruct it. 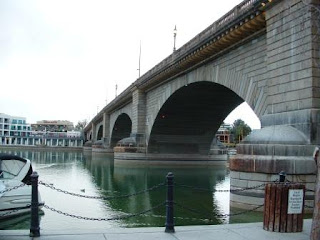 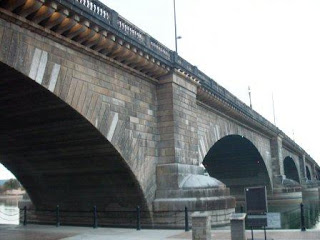 It is a “working” bridge. We drove over it before we realized we were on it. We found a place to park in the visitors’ area, and then took a closer look at the structure. The village has a fountain (not sure if it is an authentic fountain, but is surely a replica of what would have been in London in the 17th century). The village is “guarded” by two dragons, which traditionally guarded the city of London. 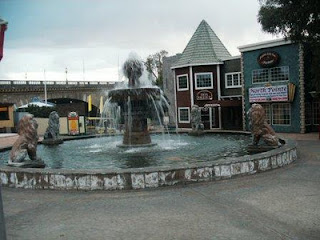 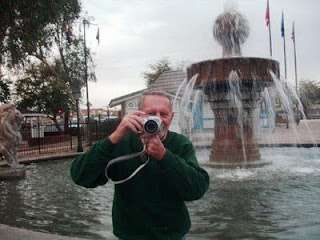 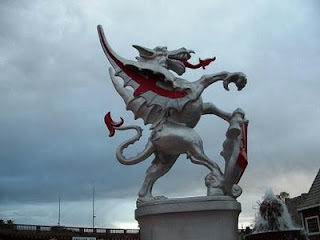 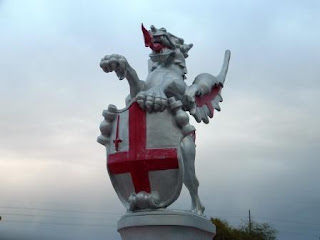 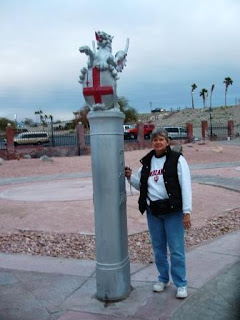 The trip to see the bridge was as interesting as the bridge itself. The highway followed the Colorado River north. It also meandered through a wide valley and up the mountains. These mountains were different from the ones we passed through to get to the resort. They are still rather barren, but they were reddish in color, rather than brown.
Communities—mostly RV resort communities—lined the river on both the Arizona and California sides. I could see the appeal; the water was inviting.
Our little trek to see the London Bridge took more than an hour each way, but it was worth it.
Until next time,
Your Reluctant RoVer,
Linda
Posted by Linda