January 24, 2012—I think there are two kinds of people: Those who like green, and those who like brown. Jim and I? We like green. We like green grass (even if it is coarse St. Augustine turf), green trees, and blooming flowers. We are not brown people. I’m sure the desert has its beauty and blooms during certain seasons, but we have yet to see it. All we see is sand, dirt, rocks, and brown. Everywhere.
Obviously a lot of people like brown. If you are on a rise looking down at the valley, all you can see is thousands of RVs, many of which are camped on BLM land. In other words, thousands of people are dry camping in this arid countryside.
We are no longer among them.
Dry camping is OK while we are on the road—at a rest stop for the night, or at a Walmart, for example. One or two nights of dry camping is OK, as long as we know the end is in sight. But to live in an RV without hookups? No way. We tried it for several days, know we could do it, but we have no desire to live that kind of RV life.
We left the BLM dry camp area yesterday morning. Although we intended to rent a space at an RV camp in Quartzsite, that didn’t work out. (See yesterday’s blog.) We were fortunate, however, to take advantage of a three-night complimentary stay at an RV resort directly on the Colorado River.
The mighty river that carved out the Grand Canyon isn’t so mighty down here. It’s rather placid but inviting. This would be a great place to vacation during the summer, to beat the hot desert heat. 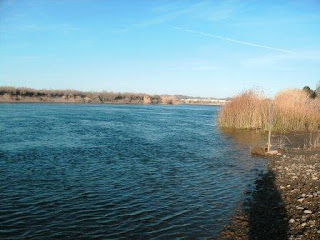 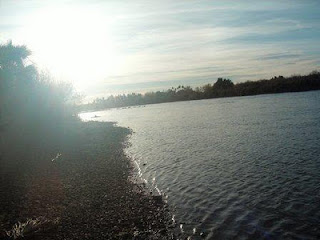 The park has its own beach area. Although we do not have a premium site adjacent to the beach, we are only a short walk away. If we were to stay here (which we will not), I would want to go fishing. I’m sure there are some great-tasting fish just waiting to be caught in the river. 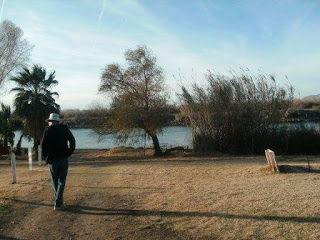 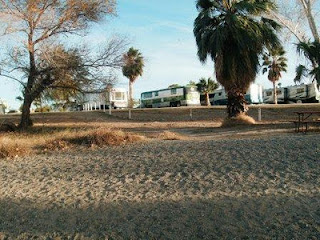 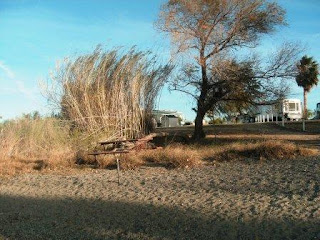 This is a nice RV resort, complete with an activities room, laundry (which we do not need), TV room, showers, heated pool, spa, playground, and supposedly a pool table (haven’t found it yet). It’s well maintained. The only thing it is short on is shade, but then, again, we are in the desert, which doesn’t have too many trees growing in it.
It was really nice being able to take a luxurious shower, watch TV, and relax in a warm “house,” compared to staying in the desert, where we had to take Navy showers, limit our TV watching to the few hours we used the generator, and keep warm under blankets alone. (In the morning, the inside temperature would drop to the mid 40s. Yuk.)
Of course, when we were in the desert, we didn’t have the problem of the drains overflowing. Jim forgot to release the gray-water valve before we started doing laundry. Half-way through the second load of clothes, water was gushing up through the shower, all over the floor. Ah, well. The floor needed to be washed, anyway, along with the rugs and all the towels we have with us…
That little incident aside, it truly was nice to relax in our home-away-from-home, in the luxury of an RV park.
Until next time,
Your Reluctant RoVer,
Linda
Posted by Linda