January 27, 2012—About a million years ago (actually in 1965, 47 years ago), I rode my first horse. As a participant of the IU Junior Year Abroad Program in Lima, Peru, I was living with a family by the name of Galindo, consisting of mama, papa, Pacho (who was about three years older than my 20), and Cucha (a year older than me).
If I were to label this family, I would say they were upper middle class, by our American standards. They had more money, by far, than my family did. Sr. Galindo (papa) was an attorney who later sat on Peru’s Supreme Court. Sra. Galindo was a social climber who was extremely prejudiced against darker-skinned, mixed race individuals (cholos). Cucha was a high-school drop-out who occasionally worked for her father but whose real ambition was to ride and jump horses. Pacho was a ne’er-do-well—a college dropout who could not hold down a job. He was very charming, but lacked any ambition. (I later found out he was paranoid schizophrenic, which might account for his apparent shortcomings.)
I was in South America to study at the University of San Marcos, but before classes started, I had some free time. Cucha invited me to go to the stables with her and watch her ride and jump.
I went a few times to watch, but that became boring very rapidly. Horses are beautiful; riding looked like fun, and I wanted to try it.
Cucha boarded her horse in stables run by the Peruvian Army. Civilians were apparently allowed to ride the cavalry horses, and she arranged for me to have a go at it.
Aside from mounting an occasional pony as a child, I had never ridden a horse before, so I was excited. A soldier brought out a nice looking working horse and helped me mount. After a bit of instruction, I was able to walk him around the gated area, and I believe I even got him to trot. Unfortunately, someone had left a gate open. When the horse spied the open gate, much to my surprise, he took off in a run.
If I recall correctly, I held on anyway I could think of. I think I took hold of the saddle, or perhaps it was his neck. I was determined not to fall off, and I did not. I also tried reining him in, calling for his to “Stop” and “Alto!” Neither English nor Spanish worked. That horse had one thing in mind: to get back to his stable as soon as possible (and get me off his back).
He finally stopped; I dismounted, unscathed. As the soldier took the horse away, he told me that the week before he threw a woman who had been riding him. So much for horseback riding! For a while, anyway, I decided I would watch.
The next time I went with Cucha, she was to ride two different horses. As she practiced with one, a soldier was holding the reigns of another. I thought it would be nice to pet the horse. Uh…I didn’t know you were supposed to start at the front and work your way back. I started on the haunch.
The horse didn’t like that. He kicked me, right in the gluteus maximum! (I was fortunate that he missed my backbone.) I went home with a horse-shoe print on my butt and couldn’t sit very well for several days.
I think I went riding one more time while I was in Peru. I liked it, but I was a student, and I didn’t have time to go to the stables.
Fast forward about 18 years. I was living in a suburb or New Orleans and working for a distributorship owned by Miller Brewing Company. One of the sales supervisors, an African American and city-born and bred, had an unusual hobby: He was a quarter-horse judge on weekends. He was the only African American quarter-horse judge in Louisiana, if I recall correctly.
I didn’t know much about quarter horses, so he offered to show me some. We met at the place he boarded his horse, and the stable master saddled a mare up for me. I trotted around, thoroughly enjoying myself, until another horse—a stallion—suddenly took an interest in the horse (mare) I was riding. It was a short ride; I didn’t want to be in the middle of a courting ritual.
That was the last time I rode until today. We drove out to visit my friend Ann Louise, who moved to Buckeye, Ariz., from the Chicago area around the same time I moved to Florida in 1998. (She was kind enough to allow me to have a couple packages delivered to her house.) Ann Louise has a horse named Guayasutra. She asked if we would like to ride him. 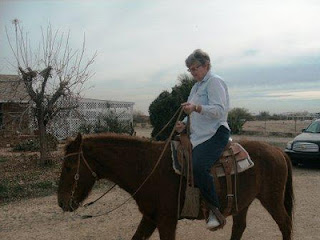 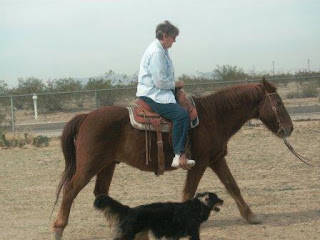 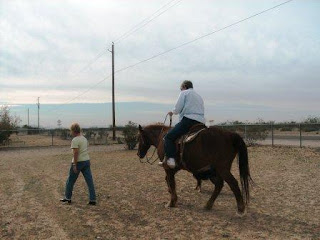 How could we say know? I was doubtful, however, if I could mount him. Two knee replacements and a lot more weight than I had back in 1965 would make it difficult. I did it, though, and we walked and trotted around the yard. “Horsie” didn’t like listening to me, however. He’s a mama’s boy and would only go where Ann Louise led him, with or without her holding the reigns.
Jim also got to ride. He hadn’t ridden a horse in many, many years (probably since he was a boy), and he said he had never ridden using a saddle. When he was a boy visiting his grandparents in North Carolina, he used to ride bareback, a huge work horse. I must say that he looked comfortable in the saddle. 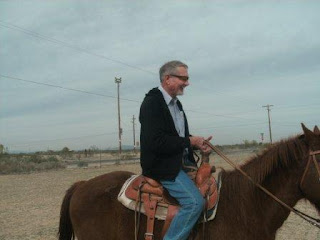 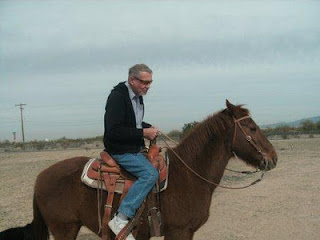 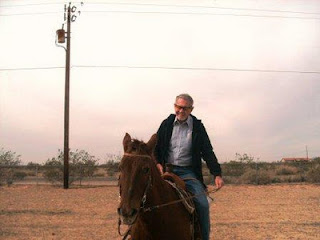 We didn’t ride very long, but it was fun and makes me want to do it again. I hope it doesn’t take another 18 years. 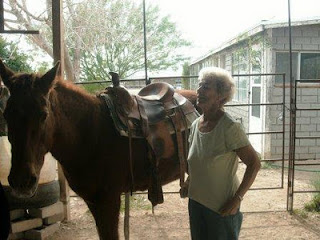 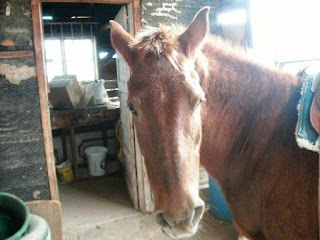 Until next time,
Your Reluctant RoVer,
Linda
at January 27, 2012