A castle made of coral

December 9, 2011—The Jacksonville PBS TV station has aired a program called “Weird Florida.” In it an old “cracker” (native Floridian, who in this case is an aging hippie), takes off in a convertible accompanied by his faithful dog to see oddities off the beaten track throughout Florida. It’s fun to watch.
One of the episodes showed the Coral Castle in Homestead, just southwest of Miami.
A 5 foot, 100 pound man by the name of Edward Leedskalnin, an immigrant from Latvia, spent 20 years building this castle, from 1920 to 1940. Everything in the castle is honed from native coral, which he himself quarried without the use of mechanized tools. It is amazing.
It is also very odd, to say the least.
Ed built the edifice to honor a love he never had. On the eve of his wedding, his bride-to-be, Agnes, told him she would not marry him. He left Latvia and eventually found his way to south Florida. He began building his castle in Florida City, but when civilization encroached on his privacy, he moved all of his creations—literally tons of them—to 10 acres he purchased in Homestead, 10 miles away.
Interestingly, no one ever saw Ed work on his castle. No one ever saw how he quarried the coral, how he moved it, and how he lifted these pieces, which weigh thousands of pounds. He did most of his work at night, by lantern. He claimed he could move the tons of coral by himself because he understood how to leverage weight. Incidentally, this man only had a fourth-grade education.
The castle has walls, rooms, and furniture. The sculpted the chairs, which are actually very comfortable, to rock. He made beds, tables, and even a bathtub, which he filled from a well he dug in the compound. He would fill the tub in the morning and by the afternoon, the sun would warm the water enough to bathe in. He even built a telescope similar to the ones created by the Incas and Mayas 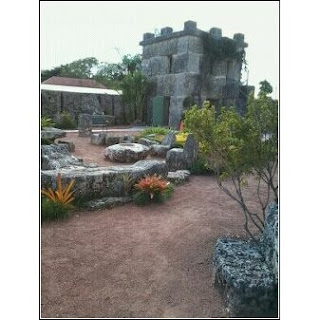 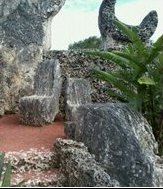 .
I thought possibly I had seen this castle when I was a child, but when I asked my mother, she did not recall visiting it.. (Incidentally, in an earlier blog, I wrote that I had toured Florida with my family when I was about 5 or 6 years old. My mother told me today that the vacation occurred in 1953, when I was 8 years old.)
Jim also took a tour of Florida in 1953, but he said he had never been to the Coral Castle. It was on his list of things to do. So, we did it.
Whether Edward Leedskalnin had been eccentric or truly crazy, the tour of his castle was worth the time. No one will ever know for sure how he managed to do the fantastic things he did. Jim has a theory, however: It was aliens.
We’ll never know.
Until next time,
Your Reluctant RoVer,
Linda
at December 10, 2011