Oct. 24, 2011—I lived through the hippie era, but I don’t remember much about it. I didn’t even know about Woodstock, which happened, I think, in 1969, until 1975!
I guess I have no memories of those times and those people because I was in a different world. I entered college in the fall of 1963 and was able to attend, provided I maintained my academic scholarships, which required a 3.3 grade point average. My concentration, therefore, was on studying, not “having fun.” And I was poor. Back then, I had a budget of $5 a week for spending money, which had to go for laundry as well as an occasional movie or hamburger and coke.
Unlike the kids today, who have all kinds of electronic toys, I didn’t have a stereo (that’s what they were called, and they required a phonograph record player and speakers). I had a clock radio, a gift from my grandparents, which I used for the clock more than for the radio. When I did listen, it was usually to classical music, unless I could pick up some folk music. I didn’t know the names of the pop artists of the ‘60s.
I did know (barely) The Beatles. I lived in a girls’ dorm at Indiana University. Back then, the women had “hours.” We had to be in at 11 p.m. on week nights, and as I recall, 1 a.m. on Friday and Saturday. The men had no hours. The powers-that-be assumed that once the fellows took their dates home they would have no place to go except back to their dorms.
Nobody had televisions in their rooms. Televisions back then were humongous affairs that aired programs in black and white. (Color was just coming on the scene but was very expensive, with only a few programs aired in that format.) The TV was located in the rec room, where girls could entertain their dates. (Men were not allowed in the dorm proper.) The problem was, the rec room became a “make-out” room, and it could be rather embarrassing for single girls to go down there to watch TV.
The dorm counselors decided to do something about it. They made a rule that couples always had to have one foot on the floor. That was supposed to take care of the heavy petting!
A number of girls (my very attractive roommate included) decided the rule was ridiculous. So, they arranged a protest. On Feb. 14 (Valentine’s Day), they stood outside the dorm, and at the stroke of 11 (when they were supposed to be inside), they kissed their boyfriends to the accompaniment of “I Wanna Hold Your Hand.”
The local newspaper took a picture of my roommate and her boyfriend smooching. It made front page.
Nothing changed, including the situation in the make-out room. But that was how I became aware of The Beatles.
Hippies actually arrived on the scene a little later, in the late ‘60s and early ‘70s, when a lot of social protesting was going on. I missed a lot of that, too, because I spent 1965 in South America, studying in an IU Junior Year Abroad Program. 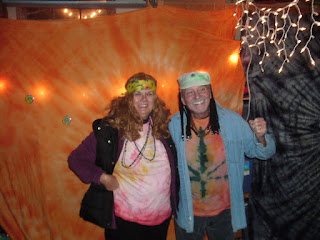 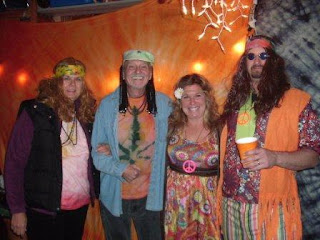 When the hippie movement began and protests were a regular part of the extracurricular agenda, I refrained from engaging in them. I was going to be a teacher; I didn’t want anything to mar my “record.” And I was already into an adult world, since I was married my senior year in college. My life had a different focus.
When Jim and I received an invitation to attend Rob’s 40th birthday party, we were told we had to come in costume—a hippie costume. So, we researched that era, and dressed up as well as we could.
I think, though, the young people at the party (we were the golden oldies), knew more about hippies than we did! My son looked like John Lennon.
The music was great! It was everything I had missed while I was growing up—and everything I love now! They don’t write music like that anymore.
The party started about 7:30 p.m. Jim and I left and walked back to our motorhome, parked on a cul-de-sac around the corner from Rob’s house, around 10.
We had had enough of nostalgia, and let the kids enjoy themselves, until, we were told, about 2 a.m. I’m glad Rob had a great 40th birthday party.
Until next time,
Your Reluctant RoVer,
Linda
Posted by Linda