Oct. 24—Visiting grandkids is always a treat. It’s especially nice when you can go home to your own bed in your motorhome.
I couldn’t get over how big the grandkids are grown! Jackson is now 9 and Maddie 12. Jackson was thrilled that we would be able to watch him play in his flag football game. I’d never seen a flag football game before and learned that the rules were considerably different from “regular” football. Nevertheless, I was able to follow (more or less) the action, especially when Jack was passed the ball and ran for some first downs. His team won, incidentally. 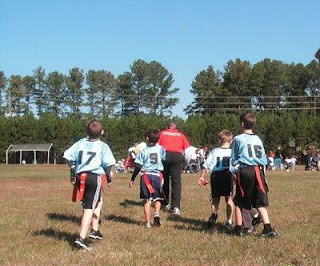 After the game, he wanted to come back with us to get our RV; he wanted to be first to see it and become an “expert” on its operation. When we got to the motorhome, he said he needed to use the bathroom. The toilet in a motorhome is different from a house toilet; there is no tank, and flushing is done by stepping on a pedal and letting water into the bowl. Jack went into the bathroom and immediately asked, “How do you flush the toilet?” I answered, “I’ll show you when you’re done.” He replied, “It’s OK, it can show me now. I haven’t done anything yet.”
Later, as we were enroute, he asked, “What happens if someone needs to use the bathroom when you are driving along?” You just get up and go, I said, unless you are driving, of course. With that, he got up to go. I think he just wanted to use the john “for fun.”
Later that afternoon, after we had parked, he and a friend rang our doorbell. (Yes, we have a doorbell.) I think he wanted to use the john again. Anyway, he asked about hauling the “toad” and problems we might encounter. I told him the story of our getting stuck in the sand while we were sightseeing the Imperial Dunes in California. He politely listened, then got up and said, “Thank you for the story time, grandma.” It was hilarious. 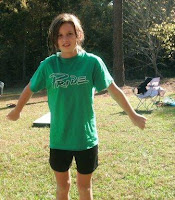 Maddie is also growing up to be a young lady. At 12, she is tall and lanky, much as I was at her age. She remains a shy girl, but we had a few “moments” together, especially after she and I teamed up against her Mom and Grandpa Jim in a game of bean toss. We won.
I miss them already. I wish I could have a real relationship with them. Once or twice a year doesn’t really do it. Far-flung families, however, are a product of today’s mobile and global world. 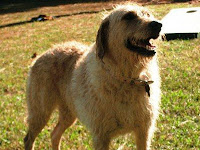 Maddie and Jack have two dogs, Penny, a mixed Lab, and Howie, a poodle mix. Both are good dogs, but I am especially fond of Howie, a friend lap dog, who is the spitting image of my long-gone Poochie. 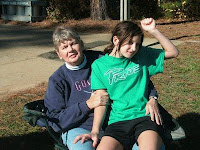 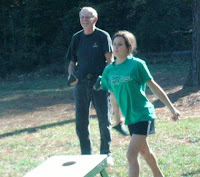 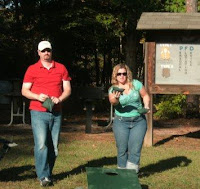 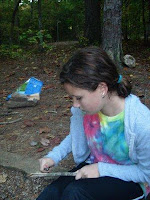 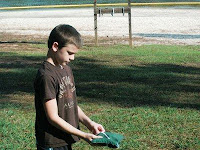 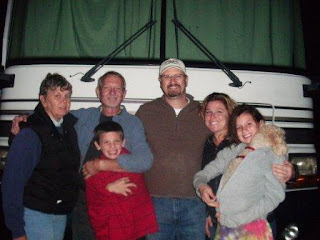 Yesterday, when Rob brought his family to the camp site, where we played bean toss and later cooked out and then enjoyed a camp fire, the dogs also enjoyed the out-of-doors. It was a great family time. 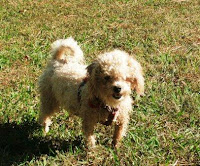 I wish I had a lap dog like Howie. I threaten to steal him every time I see him. Jim doesn’t want a dog, and of course we still have the cats. Cats are easier, since they (most of the time) use the litter box and can be left on their own for several days at a time. But they are not affectionate, except at night, when they (at least Charlie) decide he wants to cuddle for a few minutes.
Our cats are not getting better about traveling. Now both of them jump into the “hole” left behind the kitchen cabinet when the slide is pulled in. Jim was afraid to put the slide out until they decided to make an appearance. One night, Xena didn’t come out at all! Bu yesterday, he discovered that the shelf under that cabinet can be lifted up and out. And with that discovery, he found that there was sufficient space for the cats to remain hiding, without getting squished when we put the slide out. He just takes a drawer out so they can get out of their little den. I guess that’s easier to do than trying to patch up all the open spaces where they can crawl into.
We’re staying at an RV park with complete hookups outside of Charlotte, N.C. Right now I’m doing a third load of clothes. It’s really nice having a washer-dryer in this rig. Tomorrow we are going to play golf at an area course, so we’ll stay here an extra night. Then on Wednesday we’ll head out toward Atlanta. I don’t know if we’ll spend another night in South Carolina or Georgia before hitting the aquarium or not.
But, I guess that’s the beauty of being retired and having a home on wheels.
Until next time,
Your Reluctant RoVer,
Linda
at October 24, 2011