May 6, 2011. It took us about two hours to hook up the car, load our belongings, and stow our provisions, but here are we, turning onto I95 South on our maiden voyage to Orlando from Jacksonville, a trip that should take around two hours.

I have to confess to my unease: The few times that I have ridden shotgun in Baby I have not felt entirely safe and comfortable. There is something “unnatural” about sitting so high above passing vehicles and swaying in the wake of semis…I don’t know if I will get used to it. Logic tells me, of course, that we are safe. Baby is bigger and heavier than almost anything on the road (except the semis), so if an accident were to happen, we would come out the “winners.” Nevertheless, I feel uneasy. It probably has more to do with being an ill-at-ease passenger than being in Baby.

I don’t like to ride shotgun (or in the back seat, either). Over the last dozen years, I have come to distrust drivers, especially those that tailgate and speed. Me? I allow myself 5 mph over the limit, tops. And I give myself the recommended car-length distance between me and the vehicle in front of me. I also slow down when I see others slowing down. Jim hates my driving; I hate his. Yet, here I am, sitting passenger in a 39 foot motorhome. Life is strange. 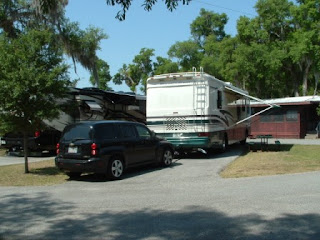 We are planning to dry camp (also known as boondocking) tonight, in the driveway of a friend in Orlando. It will be interesting to see how that goes.

May 7. We parked in our friend’s driveway last night. I don’t consider our first night in Baby as fully “initiated” because we did not cook; we did not shower; and we did not watch TV. We went out to dinner with our friends. We decided to use their shower and hot water instead of Baby’s. And we could not watch TV:

Without starting the generator (which would have been loud in that quiet neighborhood), we were limited to a few lights.

I wish I could say we slept well. The bed is comfortable enough (unlike many we’ve found in motorhomes), but we both tossed until almost dawn.

I played my first official role as “backer upper”—the person who guides the driver in backing up. It’s quite frightening, but Jim is becoming adept at maneuvering the bus. 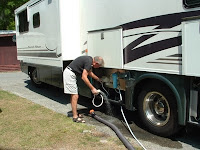 May 8. Last night, after a day spent cleaning up and making minor repairs to our Orlando house (on the market, any takers?) we found a campground in Kississmee, outside of Orlando. We didn’t even
have to unhook the car; we got a drive-through spot. And we now we can say we are fully initiated into RoVing: We dropped jacks, leveled Baby, extended the slide, cooked dinner, and showered. We even slept a bit better.

Jim keeps grinning like a bear. This is one of his dreams. I’m glad it’s come true for him.

Me? I’m still a reluctant . I’m the person who doesn’t enjoy a vacation until it is over, so I know I will come around.