To anyone even considering RVing: Narrowing down what to buy is a confusing process. We began by visiting a big RV dealer.
At first we thought about a travel trailer (TT). Advantages: Less expensive, can be towed behind a truck or van. Disadvantages: Since we only want to have one vehicle, that truck or van (probably a truck) would be our car. Did we really want to drive a truck all the time? Also, we would have to trade in our current vehicles and buy a truck. That would mean an added expense. And then, there was the question about our two cats: What would we do with them while we were pulling the TT down the highway?
The big brother of a TT is the fifth wheel—you can call a fifth wheel a TT on hormones. They are taller, and they have a section that goes over the bed of the truck. Advantages: Lots more room. Some of these even have (electric) fireplaces and king-sized beds. Disadvantages: Higher cost and the need for a much bigger (and more expensive) truck—plus, what would we do with the cats?
The cats seemed to be the deciding factor. Cats, to me, are not like dogs. I like Charlie and Xena, but I’m not in love with them. I could probably be content to give them a good home. Not Jim, though. Although he claims they aren’t really “cats” (because of their peculiar behaviors, which he claims are doglike), he is very fond of them. Xena, for instance, climbs into his lap every morning while he reads the newspaper, just begging to be rubbed. She does the same in the evening, when he comes to bed—just has to have her evening rub. Charlie is a talker. He talks to us (especially me) whenever I go into the bedroom, thinking it is time to go to bed. And when I do go to bed, he jumps up and starts talking to me, begging me to rub him, too. (I used to say “pet,” but that what you do to a dog, not a cat, according to Mr. Cat Lover Jim.) Charlie is also a good alarm clock. When 7 a.m. comes around, he starts talking again, telling us it is time to get up.
So, we decided to look into self-contained drivable RVs, thanks to the cats.
Of course, we had a budget, and the less we spent (in my mind), the better. To us novices, that excluded Class A motor homes—the buses. We started looking at Class Cs—the ones that have an overhang over the cab.
As we toured a number of Class Cs at a large RV dealer, I couldn’t help but notice the price tag on some of the Class As. They weren’t priced any higher than the Cs. The sales rep told us they were gas models, and yes, they could be purchased for about the same price.
So, we began to think about it…and go look at some. Finally, we narrowed our choice down to the Class As.
Next stop: Craigslist. You’d be amazed at what is advertised. We found a great gas Class A, with three slides. Very roomy, and very competitively priced, we thought. We test-drove it, and we were almost ready to buy it. Almost, but not quite. We wanted to make sure we were getting a good deal, even after checking NADA used vehicle guides, so we continued to visit a couple more RV dealers. That’s when we met Ed, the owner of a small RV store. 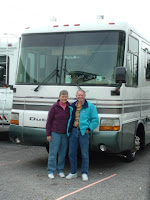 Ed showed us what he had, but then he started asking us about what we intended to do: Were we going to travel a couple times a year? Go on weekend trips? Or something else? We told him our intention (Jim’s really, but I was coming around), was to sell our house and travel extensively for several months, not only to see the country but also to find a new place to live permanently. He said, “You definitely want a Class A, but you really ought to consider a diesel pusher. You’ll have more room because of the ‘basement’ storage, and they are quieter.” He explained that gas Class As were built backwards: The engine is in the front, making it is noisy while you are driving, and the generator is in the back, making it noisy when you are sleeping. In diesel pushers, the engine is in the back and the generator is in the front. Plus, he said, diesels are cheaper to maintain and last “forever.”
When we told him they were out of our price range, he told us they weren’t. Because diesel pushers have a long life and require so little maintenance, we could buy a much older one within our price range.
That got us thinking—and wishing. Ed didn’t have any diesel pushers to show us, but said he could get us what we wanted. We just had to tell him what we were looking for.
Almost convinced, we decided to look at and test drive some diesel pushers. We were convinced. And we came back to Ed, who took our order.
A few weeks later, we became the proud owners of a 1998 Newmar Dutch Star motor home, complete with one slide, a queen sized walk-around bed, big bathroom, 32-inch flat-screen TV in the main compartment, TV in the bedroom, a stackable wash and dryer, and lots of storage.
Sure, it is older, but it only has 86,000 miles on it and runs “sweet”—much nicer than the Hurricane we almost bought. And we got a good deal on it, to boot—so good, in fact, that Ed agreed to let us park it in his lot (with a price tag that would give us a profit) until we were ready to travel. If it were to sell, he’d get a commission and we’d come out ahead and be able to buy a newer motor home (upgrade). But if it didn’t, we wouldn’t be out anything.
So, that’s where we stand right now. We’re waiting to do a “systems check” to learn how to use all the components, by camping in a nearby RV park.
Soon we’ll be ready to go.
Now if only the house were on the market…

Until next time,
Linda, the Reluctant RoVerwww.segallenterprises.com
Segall Enterprises: Writing and Editing Solutions
at January 30, 2011